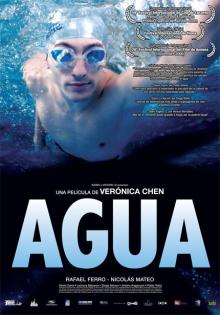 Agua (English: Water and in the United Kingdom: Argentinian Waters) is a 2006 Argentine and French sports movie directed and written by Verónica Chen and Pablo Lago. The film is centered around a former professional swimming champion returning to old glory in the sport and includes cameo appearances by real marathon swimmers like Edith van Dijk.

34-year-old Goyo, a former open water swimming champion, has been hiding out in the desert. Wrongly accused of doping in the Maratón Acuática Internacional Santa Fe - Coronda (Santa Fe-Coronda Marathon), a 57 km professional marathon swim, he has abandoned his career and his dreams.

Eight years later, Goyo returns to Santa Fe, Argentina where the professional marathon race will be held in an attempt to re-gain his title and clear his name. Goyo is inspired to attempt again after seeing a documentary about 6-time marathon swimming world champion Edith van Dijk who plays herself in the movie.

However, long buried emotions come back to haunt him. He meets Chino, a stubborn and disciplined pool swimmer, who tries hard to be selected for the national team, but fails.

The drama premiered on 21 April 2006 in Argentina at the Buenos Aires International Festival of Independent Cinema and opened countrywide on 21 September 2006.

Robert Koehler, film critic for Variety magazine, gave the film a mixed review when reporting from the Buenos Aires Independent Film Festival. He wrote, "Pretension swallows up Water, Veronica Chen's shallow follow-up to her fine 2001 debut, Smokers Only. Bookended by a hauntingly atmospheric opening sequence and a finale that makes the central characters' involvement with marathon swimming vivid and physical, the pic has a gaping hole in the middle. Hardly different in basic outline from innumerable recent sports films about outsiders and underdogs turning their lives around, the pic's only twist is an excessively and pointlessly elliptical storytelling gambit. Fest interest will be mild at best for a film with little commercial kick."[1]