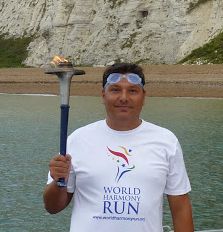 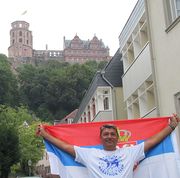 Angikar Sasa Djordjevic is an ultrarunner turned open water swimmer and member of the Sri Chinmoy Marathon Team from Serbia, who completed an English Channel crossing in 2010 in 19 hours 24 minutes, and in 2014 in 18 hours 41 minutes under the auspices of the Channel Swimming & Piloting Federation. His second solo was part of a private "Channel Triathlon Dover-Heidelberg" including a non wetsuit solo swim Dover-France, biking 560 km from Calais via Brussels and Aachen to Bingen on the Rhine, Germany, and running 127 km (3 marathons) to Heidelberg, with rests in between.