Bering Strait at the Arctic Circle 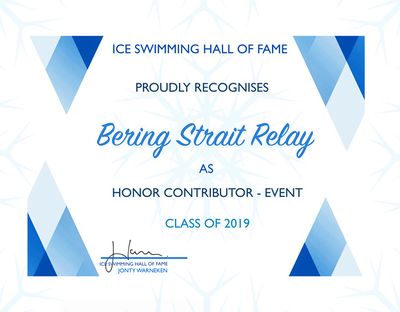 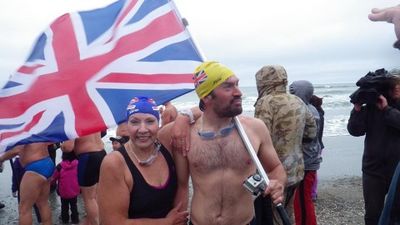 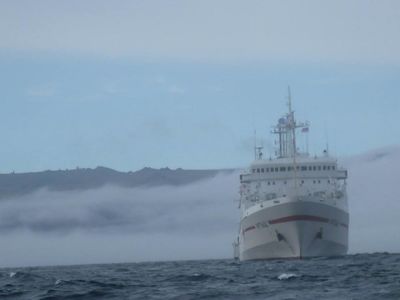 Irtysh, the Russian escort boat for the Bering Strait Swim

The Bering Papers: An Extreme Winter Swimmer’s Story tells the story of Jack Bright about his winter swimming experiences and his participation in the Bering Strait Swim

The International Relay Swim Across The Bering Strait, was an unprecedented 6-day relay swim across the Bering Strait from Cape Dezhnev in Chukotka, Russia, to Cape Prince of Wales in the state of Alaska, USA (via Big Diomede and Little Diomede Islands). The swim started at 4:24 p.m. on 5 August 2013 and finished at 4:52 p.m. on 11 August 2013.

The cross-border swim is an example of Speedo diplomacy.

The film was directed by Ariel Calderon, an Avanti Director on Film / Documentary World Merge.

The Bering Strait Swim was arranged as part of joint Russian-American project “Chukotka-Alaska 2013”. The swim started at Cape Dezhnev, Chukotka and finished at Cape Prince of Wales, Alaska, USA. 66 ice swimmers from 16 countries and 15 regions of the Russian Federation covered the distanceIreland, South Africa, Australia, Italy, Chile, Argentina, Estonia, Finland, Poland, Czech Republic, Latvia, Ukraine, China, the UK and the USA between the two continents in 6 days. 86 km in the narrowest place of the strait stretched into 134 km. The relay's adventures are just leaking out after their finish on 11 August 2013.

The water temperature was between 2.5-10°C. There were dozens of swimmers from several countries including Russia (15 regions of the Russian Federation were represented), who participated in the relay. Each swimmer swam for 10-15 minutes at a time with the distance of the crossing at 53 miles (86 km) which turned out to be 134 km.

Tides would not be a very common challenge for Russian or the Baltic regions so the organisers underestimated the power of the tides.

The rules of this swim were a tag relay, each swimmer connected by hand the swimmer before. The relay was continuous for 3 days. The swim was halted for weather reasons as docking the ribs and transfers of the swimmers and crews was deemed unsafe. The low light fog conditions and the crewing made the swim difficult to retain safety so the decision was made in conjunction with the Alexey Stistunov, President of the Russian Guinness Book of Records. The swim was declared a pioneering swim and the expedition continued safely within a few hours. The rest was welcome. The swim was again halted for permission extention and once all permits in order the swim restarted. The Current running North of the Alaskan Coast was incredibly strong and after a full out effort from the fastest swimmers the 10 km challenge was battled clearing the swim into the US coastline. The swim was finished by a 4 person relay of Russian Swimmers 13-year-old Alexander Golubkin, Evgenii Dokuchaev, Elena Guseva and Chief organiser Oleg Dokuchaev marched up onto the beach at Wales, Alaska to be greeted by a wonderful welcome by locals. Swimmers from countries carried their flags up onto the beach swimming en masse the final 400m.

On a GPS 134 km were covered by the swimmer, but without doubt as many kilometres went in reverse so this is conservative.

The Swim started at Cape Dezhnev, An American swimmer Melissa O'Reilly led out the out the first leg representing the US followed by Russian swimmers. The water started at 7/8 deg and quickly dropped to 2/3deg in the night fog.

During the swim, swimmers had to struggle with 4-5 m high waves, cold wind up to 10-15m per second sometimes rising up to 17-22m per second, up to and incl 80km @hr. Thick fog proved a difficulty for observing the swimmers, difficulties in transfers and also safety this lead to the organizers stopping the swim. The swim was moved from a continuous relay to a staged relay but never lost it's journey in being a geographical first.

Water temperature in the Bering Strait fluctuated from 2 to 10°C in the Bering Strait. There were several currents and flows especially between the Diomede islands and very close to Alaska coming from the opposite directions. It was decided at this point that breaststroke was too difficult against the high waves that 30 best sportsmen who swim freestyle were chosen to push through that 18 km part of the Bering Strait. Over 2 days and many difficult moments the swimmers swam sometimes 200m @ 40 minutes. This was the combination of a team effort from the organisers and the crews working with the swimmers. The tidal movements were uninvestigated and once the team encountered challenges they discussed and always a plan was created and the journey continued.

The marine animals were Orcas Killer Whales and Toothed Walruses,both were encountered close to Big Diomede.

All of the swimmers underwent full rigorous medical observations of ECG, Cardiac, Blood Pressure and Pulse Oxygen. All swimmers had to be cleared by the Chief of the Medical Staff before they could start and also during the event. If the medical staff were unhappy with Blood Pressure changes then the swimmer was asked to return before the next swim.

The Medical staff also had their own objectives.

A joint medical group including experts from the Amur region and the Republic of Sakha (Yakutia) analyzed how negative weather conditions and low water temperature affected the swimmers. After 10 minutes’some of the body temperature dropped to 32 degrees C, motion activity and spatial orientation slowed down, but this would be be expected. It was excellent to have the clinical experience so they can now document over several swims. The more rotations the swimmers underwent, the less time it took them to recover after swimming as they got accustomed to the unfavourable conditions. This research can be of great importance for military officers and soldiers who do their service in cold regions with very low temperatures in winter.

The Chief Organisers of the Expedition

The chief organizers of the swimming relay were the Ministry for the Defense of the Russian Federation and the Headquarters of the Eastern Military District. Partly the project was financed by the Khabarovsk territory, the Republic of Sakha (Yakutia), the Kamchatskiy territory and the Chukchi Autonomous Area. Technically the swim was performed by the public organization “Cold water Swimming Association of the Khabarovsk Territory ‘Kasatka’” and the Amur regional public organization “’Aquaice-sport’ Federation”. The American partner of the project was Alaska consulting & trade International LLC headed by Leonid Kokaurov. A highly important role in the project belongs to Arthur Chilingarov, Federation Council member and Russian President’s Special Envoy on International Cooperation in the Arctic and Antarctic, the Hero of the Soviet Union and the Hero of the Russian Federation.

This international project was devoted to the 365th anniversary of the first Russian expedition to the Bering Strait conducted by Semyon Dezhnev, to the 70th anniversary of the Alaska-Siberia airway during World War II and to the 100th anniversary of the Yakutia branch of the Russian Geographical Society. It was wonderful to meet the Mayor of Nome Denise Burns who herself was so welcoming to the team once they all arrived to Nome Alaska.

The Vessels and Support

The logistical support of the swimming relay was provided and maintained by the Eastern Military District. The Minister for the Defense General Sergey Shoigu appointed the Head of the Eastern Military District Forces Admiral Konstantin Sidenko to be the Head of the Project’s Organisation Committee. The hospital ship “Irtysh” owned by the Pacific Ocean Fleet was assigned to be the main support ship of the project. A tugboat “MB 61” together with three RIBs escorted the sportsmen while they were swimming. The crew of the ribs and the ship played a significant role to the success and the safety of the swimmers. The supervising officer of this group of boats was Victor Torbin, the chief manager of the Vladivostok-based supply vessels.

The Russian and International swimmers expressed their gratitude to A. Denisov, the captain of the hospital ship and the whole crew of the vessel for all the great job they had done to ensure the team’s comfortable stay on board the “Irtysh”.

The organizers are very grateful to the group of kite surfers which included Yevgemiy Novozheev, Sergey Semenov and Denis Berezhnov who explored the Bering Strait currents and took an active part in navigating the RIBs on 10-11 August which appeared to be the hardest days of the swim. These kite surfers were successful in crossing the Bering Strait themselves as Kite Surfers so their knowledge was wonderful.

Admission is determined by the athletes based on the following criteria:

1. Hardening experience - at least 5 years
2. Personal achievements in sports
3. Distance swims in the icy water - at least 800 meters
4. The speed of movement in cold water - not less than 2.5-3 km per hour
5. Psychological stress by swimming for 3-4 steps per day, with a stay in cold water for 15-20 minutes
6. Having a sports doctor tolerance