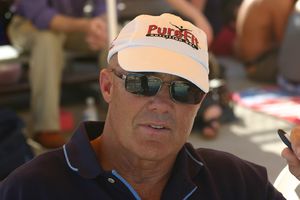 A USAT certified race director, Leach began race directing more than twelve years ago as a way to stay involved in sport as his own personal racing career was coming to an end.

Leach grew up in Southern California, playing water polo, swimming, kayaking and competing in triathlons. He was named All-American in water polo and swimming and played on the U.S. national water polo team. Leach also kayaked in the 1976 Montreal Olympic Games and was ranked as a top-10 triathlete during the 1980s, going on to compete in more than 300 triathlons.

Leach was an NCAA All American in swimming and water polo at the University of California at Irvine and participated in the Olympics in kayaking. He was later a world champion triathlete and competed on the first USA National Water Polo team to tour Europe in 1970. He has several triathlon age group national championship titles to his credit at the intermediate and half-ironman distances. Leach also earned a 50-54 triathlon world championship title in 1996. He coached at Irvine Valley College where his women's cross country team won the state championship title in 1991 and 1993. Leach continues to coach in the sports of swimming and water polo.

His wife, Julie, also went to the Olympics in kayaking and she won a gold medal in the Ironman Triathlon world championships.

Leach is also a published author having co-written the book Circle of Success: Lessons from a Lifetime of Sport with Ted Newland.

Co-authors present lessons drawn from lives immersed in championship-level athletics. The Circle of Success is an inspirational guide by Bill Leach and Ted Newland, a former Olympian and the winningest coach in the history of NCAA water polo, that seeks to apply insight gained from the authors’ careers in competitive sports to help readers set goals to achieve a successful life and personal fulfillment.

Newland and Leach have known each other for more than fifty years, developing from a coach-athlete relationship to one of friendship and mutual respect as each has built a career out of superior athletic performance. Now these men provide 37 short vignettes from their own lives, boiling down the essential elements of their success and offering them for application to any roadblock to success. Weaving personal narrative with unique insight, the book is intended to help not only young athletes but also adults seeking to achieve greater success in their business or personal lives.

"As I got older I came to realize that many of the experiences I had in various sports are universal and offer powerful lessons about dealing with success and failure," says Leach. "What I’ve learned can be applied to everyday life, at work, or in relationships."

The book contains stories that are touching, humorous and sometimes humbling as readers experience the authors’ frustrations and setbacks as well as their victories.

He and his business partner, Bob Cuyler, own Pelican Coast Events that organizes triathlons and two open water swims.