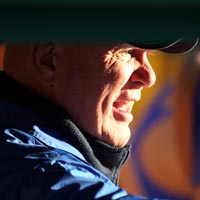 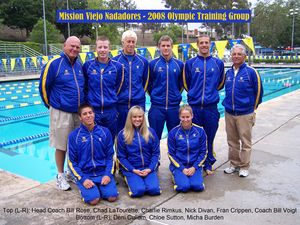 Bill Rose is a highly recognized coach in the sport of swimming, both pool and open water, within the United States and overseas. A lofty recognition to uphold, his continued presence and accomplishments on the national and international levels, as well as with his club team, the Mission Viejo Nadadores head coach and CEO has the ability to foster talent on any team.

Representing Team U.S.A. “The whole key is anytime I can be somewhere representing the United States and taking in that type of atmosphere, there is nothing better. It is the gold medal coaches get.”

Coach Rose has been selected to the U.S. coaching staff at the 2008 Beijing Olympics as the head open water swimming coach and at the 2009 World Swimming Championships in Rome, Italy. Placing a swimmer on the women’s team in two events, he had the pleasure of not only coaching the nation’s best, but also the Mission Viejo Nadadores’ best. In addition, Rose coached his former swimmer to the bronze medal in the men’s open water 10K at the meet.

The selection by USA Swimming to place Rose on the most recent world championship coaching staff came after an already full-packed resume of success at a variety of international meets over the years. In 1995, Rose was selected to coach the U.S. team at the Pan American Games in Argentina and again in 2003 in the Dominican Republic.

Respected as one of the best coaches for the nation’s young athletes, Coach Rose has been selected to three World University Games coaching staffs for the United States. In 1997 he coached the team in Italy, and in 1999 he was named head coach of the women’s team in Spain. The 2006 games had special meaning to Rose, as he guided the team in Turkey, and also watched as his Mission Viejo Nadadore swimmer win the men’s 1500m freestyle, taking home a gold for team USA.

Known for his ability to develop some of the world’s strongest open water and distance swimmers, Rose was the head coach of the open water swimming team at the 2007 FINA World Swimming Championships in Melbourne, Australia. He also coached on the swim staff there as well.

The 2000 Sydney Olympics were a platform for Coach Rose’s swimmers to shine. In total, he placed one athlete on the U.S. team and six swimmers on other country’s teams. He was also honored as the head coach of the Mexico team after his swimmers made up the majority of the country’s entire team.

Four years of hard work and dedication to his swimmers later, Rose witnessed one of his Mission Viejo Nadadore swimmers qualify for the U.S. team in the men’s 1500m freestyle. At the games, he would go on to capture a silver medal, and shatter the American Record by 11 seconds-further testifying to Coach Rose’s ability to foster great endurance athletes.

Aside from his recognition by USA Swimming to lead teams at a variety of meets, there are other honors that Coach Rose has been bestowed upon throughout the years. Most notably was in 2004 when he was inducted into the American Swim Coaches Hall of Fame. The honor testified to the respect he has by his peers in the sport.

In 2006, the honor spoke to not only his personal coaching skills but also that of his growing powerhouse in Mission Viejo, California.

When asked what makes him a great coach, his swimmers quickly answer. Frequently, the responses hint to his supportiveness, his ability to motivate and teach confidence, and the importance of being a better personal all around.

Most importantly, his swimmers comment on how Coach Rose is fun and jokes around a lot but also knows when to get to business. To his swimmers, he provides the perfect balance to succeed. Also aiding to his success is the Mission Viejo Nadadore’s entire program that he has continued to grow since 1992. Currently, the program has 47 National Team Championships to its name as well as 12 Olympic gold medals, 7 Olympic silver medals, and one bronze medal by past swimmers. Past and current swimmers have broken 91 American Records, 22 World Records, and have produced more than 135 All-Americans. As CEO of the program, Coach Rose has had the support of numerous full-time and part-time coaches to create the powerhouse it is today.

Coach Rose was the 2009 recipient of the Glen S. Hummer Award, an award given to the individual who makes the greatest contribution to the open water swimming in the United States.