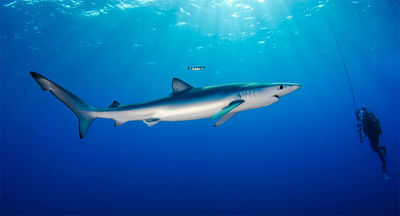 noun - Blue sharks are a species of requiem shark that inhabits deep waters in the world's temperate and tropical oceans. Preferring cooler waters, blue sharks migrate long distances, such as from New England to South America. Although generally lethargic, they can move very quickly. Blue sharks are viviparous and are noted for large litters of 25 to over 100 pups. They feed primarily on small fish and squid, although they can take larger prey. Maximum lifespan is still unknown, but it is believed that they can live up to 20 years.