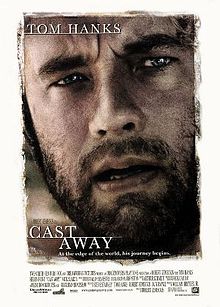 Cast Away is a 2000 American adventure drama film directed and produced by Robert Zemeckis and starring Tom Hanks as a FedEx employee stranded on an uninhabited island after his plane crashes in the South Pacific. The film depicts his attempts to survive on the island using remnants of his plane's cargo. The film was a critical and commercial success, and Hanks was nominated for Best Actor in a Leading Role at the 73rd Academy Awards for his performance.

In 1995, Chuck Noland (Tom Hanks) is a time-obsessed systems analyst, who travels worldwide resolving productivity problems at FedEx depots. He is in a long-term relationship with Kelly Frears (Helen Hunt), with whom he lives in Memphis, Tennessee. Although the couple wants to get married, Chuck's busy schedule interferes with their relationship. A Christmas with relatives is interrupted by Chuck being summoned to resolve a problem in Malaysia. While flying through a violent storm, his airplane crashes into the Pacific Ocean. Chuck is able to escape the sinking plane and is saved by an inflatable life-raft but in the process, loses the raft's emergency locator transmitter. He clings to the life-raft, loses consciousness, and floats all night before being washed up on an island. After he awakens, he explores the island and soon discovers that it is uninhabited.

Several FedEx packages from the crashed plane wash up on the shore, as well as the corpse of one of the pilots (whom he buries). He initially tries to signal for rescue and makes an escape attempt with the remnants of his life-raft, but he cannot pass the powerful surf. He searches for food, water, shelter, and opens the packages, finding a number of potentially useful items. He leaves one package, with a pair of wings painted on it, unopened. During a first attempt to make fire, Chuck receives a deep wound to his hand. In anger he throws several objects, including a Wilson Sporting Goods volleyball from one of the packages. A short time later he draws a face in the bloody hand print on the ball, names it Wilson and begins talking to it.

Four years later, Chuck is dramatically thinner, bearded, his hair is longer, and he is wearing a loincloth. He has become adept at spearing fish and making fires. He also has regular conversations and arguments with Wilson. A large section from a portable toilet washes up on the island; Chuck uses it as a sail in the construction of a raft. After spending some time building and stocking the raft and deciding when the weather conditions will be optimal (using an analemma he has created in his cave to monitor the time of year), he launches, using the sail to overcome the powerful surf. After some time on the ocean, a storm nearly tears his raft apart. The following day, "Wilson" falls from the raft and is lost, leaving Chuck overwhelmed by loneliness. Later, he is found drifting by a passing cargo ship.

Upon returning to civilization, Chuck learns that he has long been given up for dead; his family and friends had held a funeral, and Kelly has since married Chuck's dentist and has a daughter. After reuniting with Kelly, the pair profess their love for each other but, realizing a future together would be impossible due to her commitment to her family, they part. Kelly gives Chuck the keys to the car they once shared. Chuck then travels out into the country to return the unopened FedEx package to its sender. The house at the address is empty, so he leaves the package at the door with a note saying that the package saved his life. He then departs and stops at a remote crossroads. A woman passing by in a pickup truck stops to explain where each road leads. As she drives away, Chuck notices the illustration on her truck is identical to the one on the parcel. Chuck is left looking down each road and then toward the departing woman in the truck.

Cast Away was filmed on Monuriki, one of the Mamanuca Islands in Fiji. It is in a subgroup of the Mamanuca archipelago, which is sited off the coast of Viti Levu, Fiji's largest island. The island became a tourist attraction following the film's release.

In the film, Wilson the volleyball serves as Chuck Noland's personified friend and only companion during the four years that Noland spends alone on a deserted island. The character was created by screenwriter William Broyles, Jr. While researching for the film, he consulted with professional survival experts, and then chose to deliberately strand himself for one week on an isolated beach in the Sea of Cortez, to force himself to search for water and food, and obtain his own shelter. During this time, a volleyball washed up on shore. This was the inspiration for the film's inanimate companion. From a theatrical point of view, Wilson also serves to realistically imply dialogue in a one-person-only situation.

One of the original volleyball props was sold at auction after release of the film for $18,500 to the ex-CEO of FedEx Office, Ken May. At the time of the film's release, Wilson Sporting Goods launched its own joint promotion centered around the fact that one of its products was "co-starring" with Tom Hanks. Wilson manufactured a volleyball with a reproduction of the bloodied handprint face on one side. It was sold for a limited time during the film's initial release and continues to be offered on the company's website.