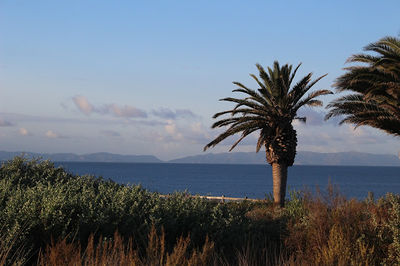 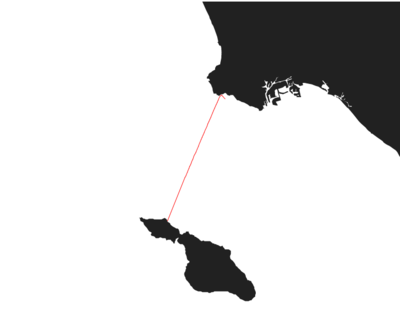 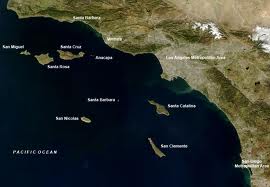 Channel Islands of the coast of Southern California 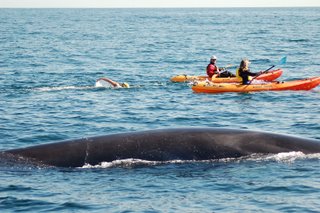 Swimming in the Catalina Channel

As one of the Channel Islands of California archipelago, Catalina lies within Los Angeles County. Most of the island is administered by the Catalina Island Conservancy.

The Catalina Channel is well-known in the marathon swimming and channel swimming community for its challenging courses - either a channel crossing the San Pedro Channel between Catalina Island and the Southern California mainland or a circumnavigation around Catalina Island itself. Either course presents an extremely demanding swim in cold water, often with strong currents and potentially high waves and abundant marine life. Attempts on either course are generally made from June - October, although swimmers have attempted swims throughout the year.

The Catalina Channel is 20.2 miles. The circumnavigation course is at least 48 miles (77.2 km). The threat of sharks is always present.

Only two circumnavigations has been authenticated (Cindy Cleveland and Forrest Nelson), but over 200 solo crossings or double crossings have been successfully documented and authenticated by the Catalina Channel Swimming Federation.

Swim Camp Catalina is an open water swimming camp co-founded by Scott Zornig and Jamie Patrick and is held on Santa Catalina Island.

The total population as of the 2000 census was 3,696 persons, almost 85 percent of whom live in the island's only incorporated city, Avalon (pop. 3,127, with another 195 south of town, outside of the city limits). The second center of population is the unincorporated village of Two Harbors, in the north, with a population of 298. Development occurs also at the smaller settlements of Rancho Escondido and Middle Ranch. The remaining population is scattered over the island between the two population centers.

Prior to the modern era, the island was inhabited by people of the Gabrielino/Tongva tribe, who, having had villages near present day San Pedro and Playa del Rey, regularly traveled back and forth to Catalina for trade. The Tongva called the island Pimu or Pimugna and referred to themselves as the Pimugnans. Archeological evidence shows Tongva settlement beginning in 7000 BC. These Pimugnans had settlements all over the island at one time or another, with their biggest villages being at the Isthmus and at present-day Avalon, Shark/Little Harbor, and Emerald Bay. The Gabrielino/Tongva are renowned for their mining, working and trade of soapstone which was found in great quantities and varieties on the island. This material was in great demand and was traded along the California coast and as far south as Baja California. Juan Rodríguez Cabrillo

The first European to set foot on the island was Portuguese explorer Juan Rodriguez Cabrillo, sailing for Spain. On October 7, 1542, he claimed the island for Spain and christened it San Salvador after his ship (Catalina has also been identified as one of the many possible burial sites for Cabrillo). Over half a century later, another Spanish explorer, Sebastian Vizcaino, rediscovered the island on the eve of Saint Catherine's day (November 24) in 1602. Vizcaino renamed the island in the saint's honor.

During the next 300 years, the island served as home or base of operation for many visitors, including Russian otter hunters, Yankee smugglers and itinerant fishermen. Among these visitors, the Aleuts of Russian Alaska probably had the largest effect on the island and its people. These otter-hunters from the Aleutian Islands set up camps on Santa Catalina, and the surrounding Channel Islands, trading with the native peoples in exchange for permission to hunt otters and seals around the island for their pelts. The Aleuts brought diseases to the natives of Santa Catalina Island, for which they had no immunity. This, ultimately, led to the demise of the Pimugnan people. Although these hunters had been known to lead attacks on the native people of surrounding islands, such as the massacre that took place on San Nicolas Island, there is no evidence of such an event on Santa Catalina. Smuggling also took place on the island for a long period of time. Pirates found that the island's abundance of hidden coves, as well as its short distance to the mainland and its small population, made it suitable for smuggling activities. Once used by smugglers of illegal Chinese immigrants, China Point, located on the south western end of Catalina, still bears its namesake.

Governor Pío Pico made a Mexican land grant of the Island of Santa Catalina to Thomas M. Robbins in 1846, as Rancho Santa Catalina. Thomas M. Robbins (1801–1854) a sea captain who came to California in 1823, married the daughter of Carlos Antonio Carrillo. Robbins established a small rancho on the Island, but sold it in 1850 to Jose Maria Covarrubias. A claim was filed with the Public Land Commission in 1853, and the grant was patented to José Maria Covarrubias in 1867. Covarrubias sold the island to Albert Packard of Santa Barbara in 1853, and by 1864 the entire island was owned by James Lick.

Chewing gum magnate William Wrigley, Jr. invested in Santa Catalina Island and, before his purchase, he traveled to Catalina with his wife, Ada, and son, Philip. Wrigley immediately fell in love with the island, and he bought out every last share-holder until he owned the controlling share of the Santa Catalina Island Company.

When William Wrigley, Jr. bought controlling interest in the Santa Catalina Island Company in 1919, he devoted himself to preserving and promoting it, investing millions in needed infrastructure and attractions.

When the island was bought, two ships, the Hermosa II and the S.S. Cabrillo were the only steamships that provided access to the island. Wrigley understood that transportation to and from the island was vital to Catalina's growth. He envisioned great steamers, some of the greatest the world had ever seen. He purchased the S.S. Virginia, and with some adjustments, it was renamed the S.S. Avalon in 1920. He foresaw the design of another steamship, the S.S. Catalina which was launched on the morning of May 3, 1924. Each of these ships weighed over 2,000 tons, and could hold more than 1,500 passengers. These steamships transported passengers to Catalina for many years.

In the 1920s, in an effort to generate tourism on Catalina, Wrigley tried to convince Gertrude Ederle, who had just become famous as first woman to swim across the English Channel, to swim from Catalina to the mainland. She declined, so he launched the 1927 Wrigley Ocean Marathon: offering US$25,000 to the first person to cross the channel, with US $15,000 for the first finisher of "the fair sex."

Out of a field of 102, only one man completed the swim, Canadian swimmer George Young, who finished 15 hours and 44 minutes after the start. The two women who came the closest were awarded US$2,500 each.

The island has been home to a population of approximately 150 American bison since 1924. Originally, fourteen bison were brought to the island for the filming of the movie The Vanishing American, though the scenes with the bison in them did not make it into the final cut of the film. Due to cost overruns, the film company decided to leave the bison on the island instead of bringing them back to the mainland.[22]

In the waters surrounding the island, there are schools of fish like garibaldi, Yellowtail, Kelp Bass, White seabass, Giant sea bass, Leopard sharks, blacksmiths, opaleyes, sheepheads, lingcods, bat rays, horn sharks, mackerel, bonito, barracuda, herring, anchovies, sardines, and many more. The great white shark has also been found on the west side of the island among the kelp beds.

The Catalina Orangetip butterfly is a notable insect of the island.

The island also has an abundance of rattlesnakes in the back country, which manage to control the rodent population.

About a million tourists visit the island every year; Catalina is serviced by ferries and the "Airport in the Sky." Ferries depart from Orange County in Newport Beach and Dana Point, while they depart from Los Angeles County in Long Beach, San Pedro, and Marina del Rey. The trip takes approximately an hour and costs approx US$65 round trip. Helicopter service is also available from Long Beach or San Pedro.

Most of the island is controlled by the Catalina Island Conservancy, a private nonprofit organization. The mission of the Catalina Island Conservancy is to be a responsible steward of its lands through a balance of conservation, education and recreation. Through its ongoing efforts, the Conservancy protects the magnificent natural and cultural heritage of Santa Catalina Island, stewarding approximately 42,000 acres (170 km²) of land (88 percent of the island), 50 miles (80 km) of rugged shoreline, an airport, and more than 200 miles (300 km) of roads.

Under an agreement with Los Angeles County, the Conservancy has granted an easement to allow day hiking and mountain biking, but visitors must first obtain a permit at the Conservancy's office (on which they declare the parts of the island they intend to visit). Hiking permits are free, whereas bicycle permits are available for a fee (as of 2006, $60 per person annual, $20 per person good for 2 consecutive days, helmets and mountain bikes with knobby tires required).

The use of motor vehicles on the island is restricted; there is a limit on the number of registered cars, which translates into a 10-year-long wait list to bring a car to the island. Most residents move around via golf cart. Tourists can hire a taxi from Catalina Transportation Services. Bicycles are also a popular mode of transportation. There are a number of bicycle and golf cart rental agencies on the island. Only the city of Avalon is open to the public without restrictions. Two Harbors, the smaller of the island's two population centers

Glass bottom boats tour the reefs and shipwrecks of the area, and scuba diving and snorkeling are popular in the clear water. Lover's Cove, to the east of town, and Descanso Beach, to the west of the Casino, are popular places to dive. The area is famous for the schools of flying fish and the bright orange Garibaldi which teem in local waters. Parasailing is also offered. Bus tours are given of the interior.

Avalon Harbor Beach has ranked among the most polluted in the state, tainted with human sewage that puts swimmers at risk. A report last month by the Natural Resources Defense Council listed Avalon as one of the 10 most chronically polluted beaches in the nation for failing state health tests as much as 73% of the time. Researchers years ago zeroed in on the cause: the city's rickety sewer system, made of century-old clay and metal pipes. Indeed, calling attention to tainted beach water is discouraged in a town where tourism brings in $100 million a year.

Catalina Island was also the starting point of the 1984 USA Long Distance International Championships and the 1927 Wrigley Ocean Marathon which have been the only open water swimming competition across the Catalina Channel in history.