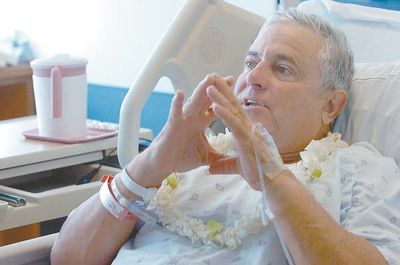 Michael Spalding, renowned Hawaiian Islands channel swimmer, in hospital recovering from a bite from a cookiecutter shark in the Alenuihaha Channel between the Big Island of Hawaii and Maui 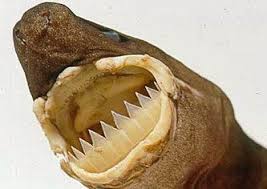 noun - The cookiecutter shark (Isistius brasiliensis), also called the cigar shark, is a species of small dogfish shark that lives in warm, oceanic waters worldwide, particularly near islands, and has been recorded swimming as deep as 3.7 km (2.3 mi). It migrates vertically up to 3 km (1.9 mi) every day, approaching the surface at dusk and descending with the dawn. Reaching only 42–56 cm (17–22 in) in length, the cookiecutter shark has a long, cylindrical body with a short, blunt snout, large eyes, two tiny spineless dorsal fins, and a large caudal fin. It is dark brown in color, with light-emitting photophores covering its underside except for a dark "collar" around its throat and gill slits.

The name "cookiecutter shark" refers to its feeding habit of gouging round plugs, like a cookie cutter, out of larger animals including great white sharks. Marks made by cookiecutter sharks have been found on a wide variety of marine mammals and fishes, as well as on submarines, undersea cables, and even human bodies including Michael Spalding, a marathon swimmer swimming between Hawaii and Maui in the state of Hawaii.

It also consumes whole smaller prey such as squid. Cookiecutter sharks have adaptations for hovering in the water column and likely rely on stealth and subterfuge to capture more active prey. Its dark collar seems to mimic the silhouette of a small fish, while the rest of its body blends into the downwelling light via its ventral photophores. When a would-be predator approaches the lure, the shark attaches itself using its suctorial lips and specialized pharynx and neatly excises a chunk of flesh using its bandsaw-like set of lower teeth. This species has been known to travel in schools.

Though rarely encountered because of its oceanic habitat, a handful of documented attacks on humans were apparently caused by cookiecutter sharks. Nevertheless, this diminutive shark is not regarded as highly dangerous. The International Union for Conservation of Nature (IUCN) has listed the cookiecutter shark under Least Concern, as it is widely distributed, has no commercial value, and is not particularly susceptible to fisheries.