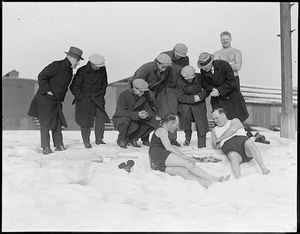 The L Street Bathhouse is located in South Boston along the Boston Harbor. It is the meeting place of the L Street Brownies Club, the oldest "Polar Bear Club" in America.

Built in 1931 by Boston's populist mayor James Michael Curley, the L Street Bathhouse was located at the intersection of Day Boulevard and L Street in South Boston. Named the L Street Bathhouse (and later re-named the Curley Community Center), the building provided hot showers and recreational facilities to the city's working people during the most difficult years of the Depression. The bathhouse remained a popular gathering spot during the years when Boston Harbor was considered safe for swimming and before air-conditioning helped people cope with the summer heat.

On January 1, 1904, the L Street Brownies held their first New Year's Day swim in Boston Harbor. Every year since then, a crowd of swimmers and an even larger crowd of onlookers has shown up to watch men—and since the l980s, women—begin the year with a swim in the icy waters of Dorchester Bay.

Keeping up a tradition introduced by European immigrants fond of cold water dips, the most dedicated L Street Brownies repeat this ritual every day of the year. Named for the beach where the club meets and for the nut-brown skin color many of the members develop from daily exposure to the sun, the L Street Brownies is the second oldest cold-water swimming club in the country.

On January 1, 2004, the centennial of the New Years Day swim, 500 men and women plunged into the icy waters of Boston Harbor. On January 2, some 40 or so dedicated members of the L Street Brownies returned to an empty stretch of beach to repeat their harbor swim.

Some accounts trace winter swimming in South Boston to 1888; others believe it began even earlier, in 1865. The practice was probably introduced by European immigrants who believed that cold-water dips, alternating with sauna or steam baths, promoted good health. Many of today's Brownies give their winter swims credit for their strong immune systems.

The L Street Brownies were officially organized in 1902. The club took its name from the L Street beach where its members swam and from the nut-brown skin color many of them developed from daily exposure to the sun.

Membership in the club costs US$1.00 and averages between 35 and 50 people, with a much larger crowd on New Years Day.

When Kevin White was mayor in the 1970s, the women's half of the building was converted into temporary classrooms for high school students. The city promised that it would be returned in three years, but the classrooms gave way to municipal offices and then the bathhouse fell into disrepair and was vandalized. In the early 1980s, the Mayor proposed closing the facility, but a public outcry, including a protest by the Brownies, saved the bathhouse. Women then led a four-year campaign to reclaim their half of the bathhouse. Under Mayor Raymond Flynn, the entire building was renovated and made into a fitness center.