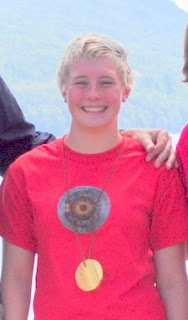 She enjoys science, literature, math and music, plays the French horn and piano and is certified as a waterfront lifeguard.