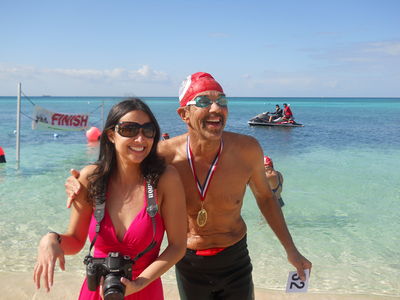 Frank Flowers is the chief executive of the Flowers Group, a successful group of companies in cement block manufacture, bottled water, real estate and development and airport security markets in the Cayman Islands. He is also the primary sponsor and organizer of the world's richest open water swim, the Flowers Sea Swim on Seven Mile Beach in Grand Cayman and the Bridging The Cayman Islands event, a 67.26-mile world record attempt from Little Cayman Island to Grand Cayman Island.

The entrepreneurial drive, the generous hospitality and the excitement of the annual Flowers Sea Swim, now on its 20th year, primarily comes from the always energetic and visionary former marathon runner-turned-open water swimmer.

The richest open water swimming event in the world happens because of one man's year-round drive and vision. Frank Flowers lassoes his vast network of business associates, government officials, tourism industry, and volunteers of all ages and walks of life to make the Cayman Islands the hot spot in the open water swimming world every June. A pioneer in open water swimming in the Cayman Islands, Flowers learned to swim at the age of 39 when running took its toll on his knees. 20 years ago, the Flowers Sea Swim was the result of this conversion from runner to swimmer. With his vision and relentless drive, swimmers from the Caribbean, Latin America, Europe, Australia, South Africa, Asia and North America gather along the course of the stunningly gorgeous Seven Mile Beach on Grand Cayman to compete in a race that offers over $100,000 in prizes. Forever generous, Flowers focuses his efforts on the needs and desires of the participants and the charities that he raises bucket loads of money for. The Flowers Family over-delivers on its promise for a memorable extravaganza with overwhelming hospitality for Olympians and over 800 swimmers. For his persuasive abilities to create an infrastructure and support for a signature event on the world's calendar, for his generosity in donating the proceeds from the event to those in need, the year-round work of Frank Flowers is a worthy nominee for the 2012 WOWSA Open Water Swimming Performance of the Year.