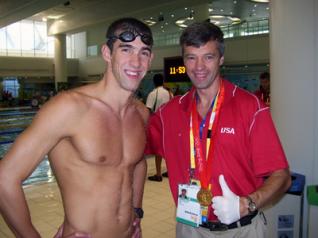 Genadijus Sokolovas, Ph.D., also known by his popular nickname in America as Dr G, is considered by many to be one of the world’s most accomplished sports physiologists. He is currently assisting world-class triathletes, pentathletes and pool and open water swimmers at the USA Olympic Training Center in Colorado Springs, Colorado and created the Vertical Swim Trainer, one of the 2014 WOWSA Awards' World Open Water Swimming Offering of the Year.

Dr. Sokolovas has also provided feedback and advice to numerous coaches and Olympic athletes in triathlon, running, cycling, modern pentathlon, fencing and wrestling. He has worked with United States Olympic Committee on supplemental oxygen training, use of altitude tents, vibration training/treatment, use of blood testing results, use of saliva testing results and use of urine testing results. He has also given presentations in many countries on training adaptation, recovery, altitude training, biomechanical analysis.

Before his work at USA Swimming, Dr. Sokolovas was the Dean of Coaching Faculty at the Lithuanian Academy of Physical Education between 1987-2000 where he served as the Scientific Advisor of Lithuanian Swimming, Modern Pentathlon and Track & Field. Also as the Head of Laboratory of Computerization in Sport, Dr. Sokolovas optimized training strategies in swimming, running, race walking, modern pentathlon and triathlon, and developed mathematical models of adaptation of athletes in career, seasonal and weekly training.

"The Vertical Swim Trainer is an ingenious, practical solution that can teach open water swimmers to improve their ability to swim more efficiently and powerfully while becoming more balanced and streamlined in the water. Invented by an extraordinary sports scientist and physiologist with numerous patents and inventions to his name, the Vertical Swim Trainer is an upright, portable piece of equipment that quickly provides swimmers with valuable feedback on how to swim better. By placing a swimmer on a movable stand with their hands placed in tethered hand paddles, swimmers immediately feels and understand the fundamental relationship between an optimal hand catch and a high elbow position with a strong core and proper lower body position. For Dr. Genadijus Sokolovas’ patented equipment for swimmers of all ages and abilities, for its impact on improving a swimmer’s efficiency, balance and streamlined position in the water, the Vertical Swim Trainer is a worthy nominee for the 2014 World Open Water Swimming Offering of the Year."

Dr. Sokolovas received his doctorate from the Russian Academy of Physical Education in Moscow where he used physiological, biochemical, and pedagogical testing programs to assess adaptation in swimming to different workload.