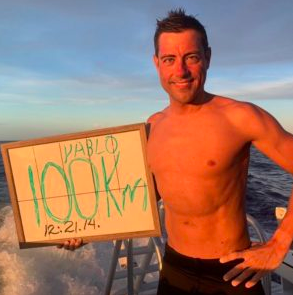 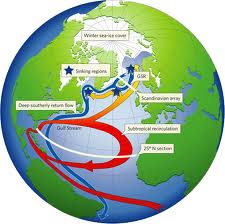 The Gulf Stream, together with its northern extension towards Europe, the North Atlantic Drift, is a powerful, warm, and swift Atlantic ocean current that originates at the tip of Florida, flows across the Florida Strait, and follows the eastern coastlines of the United States and Newfoundland before crossing the Atlantic Ocean. The process of western intensification causes the Gulf Stream to be a northward accelerating current off the east coast of North America.

At about 40°0′N 30°0′W, it splits in two, with the northern stream crossing to northern Europe and the southern stream recirculating off West Africa. The Gulf Stream influences the climate of the east coast of North America from Florida to Newfoundland, and the west coast of Europe. Although there has been recent debate, there is consensus that the climate of Western Europe and Northern Europe is warmer than it would otherwise be due to the North Atlantic drift, one of the branches from the tail of the Gulf Stream. It is part of the North Atlantic Gyre. Its presence has led to the development of strong cyclones of all types, both within the atmosphere and within the ocean. The Gulf Stream is also a significant potential source of renewable power generation.

Century Swim in the Gulf Stream[edit]