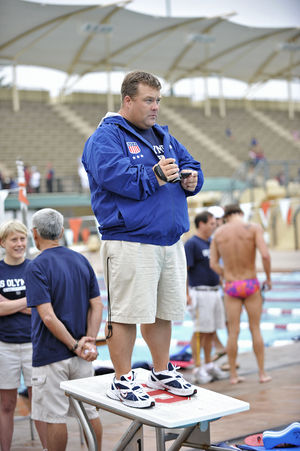 John Dussliere was on the 2008 USA Olympic Team coaching staff, and served as Chairman of the USA Swimming Club Development Committee, Chair of the Senior Swimming Committee for Southern California Swimming. He is now serving at the Director of Sport and High Performance for USA Boxing at the U.S. Olympic Training Center in Colorado Springs, Colorado.

As a coach, he began in Moline, Illinois with the Blue Marlins. He then went on to spend six years with the Los Altos-Mountain View Aquatic Club while volunteering at Stanford University where he was a part of five NCAA Division 1 Championship Teams.

In 1998, he moved on to the Mission Viejo Nadadores where he was the associate Head Coach along with Coach Bill Rose. While there, he was also in charge of coach and parent education. On deck, he has coached dozens of High School All-Americans, Junior, Senior, and Olympic Trials qualifiers. Now in Santa Barbara as its Head Coach, Coach Dussliere has produced 3 USA Swimming National Team members, 5 Junior National qualifiers, 5 Senior National Qualifiers, and Two National Champions within 18 months. He leads a professionally certified coaching staff that delivers the best possible swim instruction and youth leadership in Santa Barbara.

He is the owner and President of RaceCraft Inc. in Santa Barbara, California. RaceCraft is a corporation that holds an exclusive, long-term contract to provide coaching and management services to the Santa Barbara Swim Club. Most recently, he coached the U.S.A. Team at the FINA Open Water World Cup events this summer in both Seville and London. He is single, resides in Santa Barbara, California, and is also a member of the World Swimming Coaches Association and attended their board meeting in Melbourne, Australia this past March.