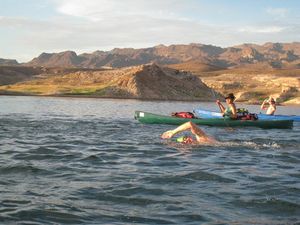 Josh Swimming in Slam the Dam at Lake Mead. 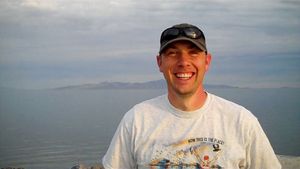 Josh organized a fantastic one mile event in the Great Salt Lake.

Josh Green is an open water swimmer, blogger, and race director in Utah. He is the founder of Utah Open Water and co-race director for the Great Salt Lake Open Water Marathon event that is held in June. He currently resides in Utah and organizes many group swims in the Wasatch Front area.

Josh conducted research on the Great Salt Lake and found that the first event was held in 1926 and continued for many years up to 1941. He decided to work with his swimming partner, Gordon Gridley, and reorganize the race along with introducing a one mile event for new open water swimmers. The event was held on June 11, 2011 and was a great success. It will be held annually in June with the next event on June 9, 2012.

A virtual open water race has been named in honor of Josh. It is 0.7 miles and is held in Bountiful Lake. Those who break the record for the race earn the right to the race trophy, and are listed in the record books!