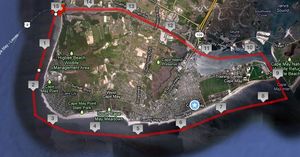 Katie Scott is a 24-year-old American open water swimmer from Cherry Hill, New Jersey. She finished third overall in the 2013 C3 or the Cape Circumnavigation Challenge, a 15.1-mile (24.3 km) marathon swim around Cape May, New Jersey on 14 September 2013, founded by Jason Malick and sanctioned by the World Open Water Swimming Association. She also won the women's division at the Swim Around Key West in both 2012 and 2013.

Cape May, New Jersey is affectionately known as "America's Oldest Seashore Resort" and has a rich history dating back to the early 1600s. Cape May was not officially an island until World War II when the Army Corp of Engineers constructed the Cape May Canal to help protect the American waterways from German "U"Boats, primarily the entrance to the prominent city of Philadelphia by way of the Delaware Bay/River.