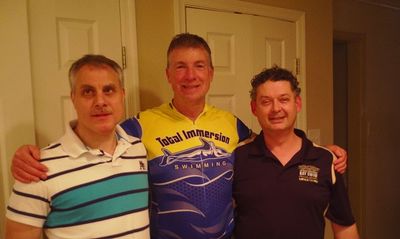 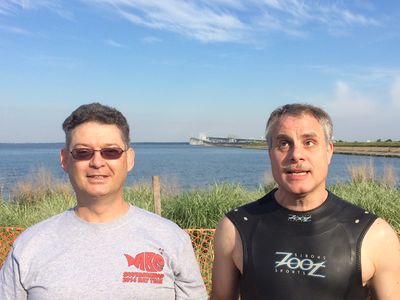 Brian and Mark ready for the Great Chesapeake Bay Swim One Mile Challenge event 2014. Brian's shirt is the 2014 team shirt from the Arundel Breakfast Club, a U.S. Masters Swimming group who train regularly in rivers near Annapolis, Maryland and many members compete in the Great Chesapeake Bay Swim annually. Mark and Brian were grateful to have the opportunity to swim with them for a shakedown before Mark's first open water event. 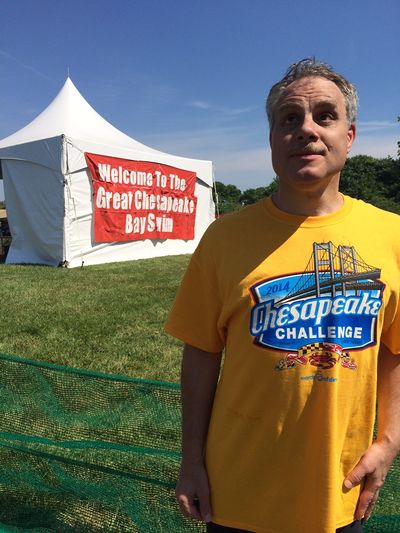 Got the T-Shirt in the Great Chesapeake Bay Swim One Mile Bay Challenge event 2014. 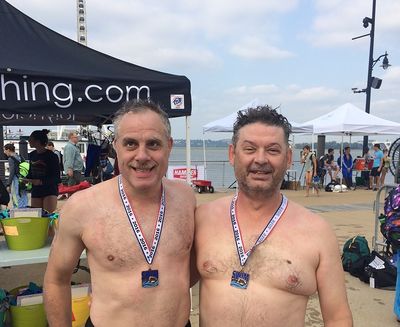 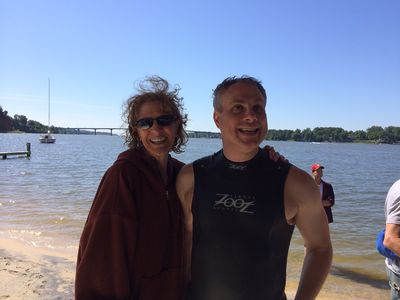 Maureen Rohrs of the Arundel Breakfast Club U.S. Masters Swimming club with Mark in 2014 at the Severn River in Maryland, U.S.A. 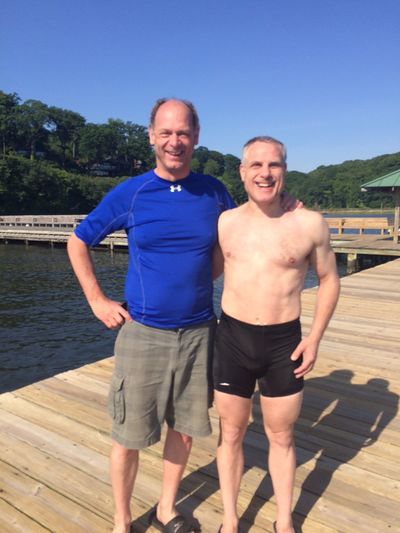 Rew is the first totally blind person to complete the One Mile Bay Challenge event at the Great Chesapeake Bay Swim, his first official open water swim event, completed in 2014 in 47:10. Rew swam as an untethered swimmer alongside his swim angel Brian Suddeth on 8 June 2014 accompanied by Brian's friend and kayaker Peggy Connor. Mark has continued training weekly with Brian and repeated the event in 2015, beating his prior time by nearly nine minutes!

Other blind athletes have completed the full 4.4-mile crossing of the Chesapeake Bay, including Butch Arnold who did an informal fundraising crossing in 1978, and Triple Crown swimmer James Pittar of Sydney, Australia who became the first blind competitor to complete the official Great Chesapeake Bay Swim event in 2003. Like many other swims, there are others who have attempted this swim and not completed it, sometimes just due to being unlucky with the weather.

Mark lost his sight in his early teens and learned to swim by informal practice. As an avid runner, he had the endurance for distance swimming, but didn't have a smooth style with it until he began studying Total Immersion freestyle with his college friend and open water butterfly swimmer Brian Suddeth in early 2014. Rew improved quickly due to the ease and quality of the Total Immersion instruction method, although the drills had to be modified and some new ones invented since Rew couldn't see his partner, nor view the many excellent videos available for training. Rew and Suddeth met with Terry Laughlin, the Founder of Total Immersion swimming in March of 2014 to share some ideas on the TI experience from a blind swimmer's point of view, and share their mutual enthusiasm for open water swimming.