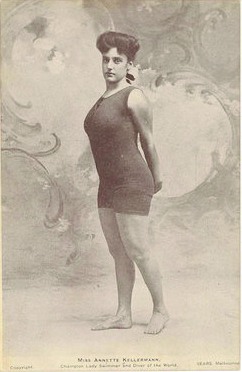 Million Dollar Mermaid is a movie based on the life of Annette Kellerman, an Honour Swimmer in the International Marathon Swimming Hall of Fame, that starred Esther Williams. The biopic of Australian swimming champion and entertainer shows how Kellerman overcame polio to achieve fame while creating a scandal when her one-piece bathing suit was considered indecent. It was listed as one of the Great Movies for Open Water Swimmers by the World Open Water Swimming Association and the Daily News of Open Water Swimming.

Kellerman was the first woman to attempt to swim the English Channel in 1905, but failed on three occasions. But she found her way to success in other venues and other times. She won numerous swimming titles in the Thames, the Danube River, Boston Harbor and the Seine River between 1905 and 1907.

She was one of the pivotal figures in the history of swimming because she was instrumental in the evolution of women's swimwear and famous for her advocacy of the right of women to wear a one-piece bathing suit, which was a controversial topic in the early 20th century. Ultimately, her life story inspired the MGM classic move Million Dollar Mermaid starring her heir apparent Esther Williams.

Annette Kellerman did more to popularize swimming (especially for women) than any other person in the early years. A childhood cripple, she swam her way out of steel braces and into good health. "Only a cripple can understand the intense joy that I experienced when little by little I found that my legs were growing stronger and taking on the normal shape and powers with which the legs of other youngsters were endowed."

"But for swimming, I might have been hobbling about on crutches today (1918) instead of skating, dancing, and indulging in 25 mile constitutionals in addition to making my regular livelihood as a moving picture mermaid, or flirting with 'Toto, the funny fish,' through the walls of the glass tank at the New York Hippodrome."

Annette Kellerman starred in motion pictures such as the "The Diving Venus", "Queen of the Sea", "A Daughter of the Gods", and "Neptune's Daughter." She crisscrossed the U.S. and circled the world in the famed "Annette Kellerman black one-piece suit" which made swimming attractive to men and liberated for women. She performed stunts and dives which mad her first among the fore-runners to synchronized swimming and women's high diving.

She won her first title as Swim Champion of New South Wales (100 yds. in 1:18) then set a women's world record for the mile with 32:29, a time which she subsequently lowered to 28 minutes. Her first distance swim was 10 miles in Australia's Yarrow River. She set records in the Yarrow at 2 1/2 miles (46 min.) and 5 miles (downriver) at an average of 21 minutes a mile. Her first public diving display was from the 50-ft. high board at Cavills Bath in Sydney. She began her pro-career giving two shows a day in the 60 ft. glass tank with fish at the Melbourne Exhibition Aquarium.

Miss Kellerman went next to England for "more people, more theaters and more money to be earned by professional swimmers." To attract attention, she swam through London along the Thames from Putney Bridge to Blackwall in 3 1/2 hours with huge crowds watching from the banks. In preparing to be the first woman to swim the English Channel (no one had made it since the one and only crossing by Capt. Matthew Webb, over 30 years before), Kellerman swam daily from town to town along the English Coast -- 4 1/2 miles Dover to St. Margaret's Bay, 11 miles Dover to Deal, 11 miles Deal to Ramsgate, 10 miles Ramsgate to Margate and finally 24 miles Dover to Ramsgate. Annette Kellerman's Channel swims never quite made it, but her 10 1/2 hours, three quarters of the way across was a women's record that held many years. On her first Channel attempt she was violently seasick and lasted 6 3/4 hours. Among the seven on this attempt was Burgess, who later became the second ever to make the Channel, 36 years after Capt. Webb's famous swim.

After her ill-fated Channel swims, Annette Kellerman tried and won a 7 mile "Seine Swim through Paris" beating 16 men as she and Burgess tied. This swim drew half a million spectators, the largest live audience ever to see a swim race. Annette challenged and beat Baroness Isa Cescu, the best known Austrian swimmer in a 22 mile Danube River Race from Tuln to Vienna.

Having conquered all the swimmers and most of the rivers of Australia and Europe, Annette came to the U.S. where she specialized in water feats as a high diving and stunt swimming artiste. After long runs in Chicago and Boston, she was signed by the Keith Circuit doing her "first time ever" diving act on stage every day for 2 years (14 shows a week). When imitators threatened her $1,250 a week contract, Annette moved on to Hollywood, where her first movie, "Neptune's Daughter", cost $35,000 to make and grossed $1,000,000. In each of her succeeding movies the public expected new stunts. After 5 movies, Annette returned to the New York Hippodrome with "the biggest mermaid spectacle ever seen live or on the stage." Forty years later Annette Kellerman was back in the film -- when her life was portrayed by Esther Williams.