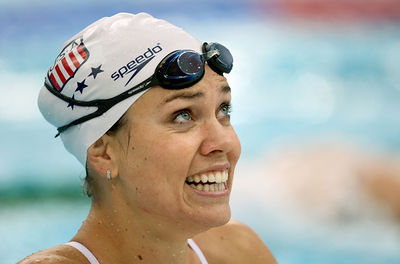 Natalie Coughlin Hall (born 23 August 1982) is an American international swimming swimmer and twelve-time Olympic medalist. At the 2008 Beijing Olympics, Coughlin became the first American female athlete in modern Olympic history to win six medals in one Olympics, the first woman ever to win a 100-meter backstroke gold in two consecutive Olympics, and is the first woman to ever swim the 100-meter backstroke in under one minute.

Coughlin's success has earned her the Swimming World Swimmers of the Year one time and Swimming World Swimmers of the Year three times. She has won a total of forty-eight medals in major international competition, twenty-one gold, seventeen silver, and ten bronze spanning the Olympics, the FINA World Aquatics Championships, and the Pan Pacific Swimming Championships Championships. She is a member of the 2012 United States Olympic team and competed in the 4x100-meter freestyle relay event at the 2012 London Olympics, where she earned a bronze medal. Her twelve Olympic medals tie her with Jenny Thompson and Dara Torres for the most all-time by an American woman.

She was inducted as an Honor Swimmer in the International Swimming Hall of Fame, Class of 2018.

She appeared on the popular television program Dancing With The Stars and occasionally swam in the open water.

Coughlin first began swimming at the local YMCA when she was only 10 months old. In 1998 at age 15, she became the first swimmer to qualify for the Summer National in all 14 events. Prior to the 2004 Athens Olympics, Coughlin was a student-athlete at the University of California, Berkeley, where she earned a BA in psychology in 2005. Coughlin won 12 National Collegiate Athletic Association Swimmer of the Year honors in her first three years at Cal.

Coughlin worked as an in-studio host for MSNBC during the 2006 Winter Olympics in Turin, Italy.

In April 2009, Coughlin married Crow Canyon Sharks swim coach, Ethan Hall. One of Coughlin's favorite hobbies is cooking. During the 2008 Beijing Olympics, she was invited to prepare a Chinese-themed dish on the Today Show. She has appeared as a judge on Iron Chef America.

While in high school, Coughlin broke two individual national high school records in the 200-yard individual medley (1:58.45) and the 100-yard backstroke (52.86). She graduated from Carondelet High School in Concord, California in 2000.

Coughlin attended the University of California, Berkeley, where she swam for coach Teri McKeever's California Golden Bears swimming and diving team in National Collegiate Athletic Association (NCAA) competition from 2001 to 2003. During her three years as a Cal Bears swimmer, she won eleven individual NCAA national championships, and a twelfth NCAA relay title. She was recognized as the NCAA Swimmer of the Year for three consecutive years; Sports Illustrated magazine named her its college Female Athlete of the Year. She graduated from the University of California with a bachelor's degree in psychology in 2005.

At the 2007 World Championships, Coughlin won five medals, two gold, two silver, and one bronze. In her first event, the 4×100-meter freestyle relay, Coughlin won a silver medal along with Lacey Nymeyer, Amanda Weir, and Kara Lynn Joyce. The following day, in the 100-meter butterfly, she placed third in the final with a time of 57.34, an American record. In the 100-meter backstroke final, held the following day, she broke her own world record set in 2002 with a time of 59.44. After a day of rest, Coughlin was back in the pool to swim the lead-off leg in the 4×200-meter freestyle relay. Swimming in lane eight, Coughlin set the American record with a time of 1:56.43, to break Katie Hoff's one-day-old record of 1:57.09. The following day, Coughlin finished in 4th place in the 100-meter freestyle despite setting the championship record in the semifinals. In her last event, the 4×100-meter medley relay, Coughlin won a silver medal along with Tara Kirk, Rachel Komisarz, and Lacey Nymeyer.

In Coughlin's second Olympics appearance, at Beijing in 2008, she became the first American female athlete"The six medals she won are the most by an American woman in any sport, breaking the record she tied four years ago. Her career total matches the third-most by any U.S. athlete." to win six medals in one Olympics. She was elected joint captain of the US women's swimming team together with five-time Olympian Dara Torres and four-time Olympian Amanda Beard. Coughlin won the gold medal in the 100-meter backstroke at those Games, becoming the first woman to retain the gold medal position in that event. She had lost her world record to Kirsty Coventry, the eventual winner of the silver medal, in the semi-final. When receiving her medal, her lip was still bleeding where she had bitten it during the race to distract her from the pain in her legs. She won a silver medal in the 4×100-meter freestyle relay, swimming with Lacey Nymeyer, Kara Lynn Joyce and Dara Torres, and also won bronze medals in the 200-meter individual medley, 4x200-meter freestyle relay, and the 100-meter freestyle. She won a silver medal in her final race in the 4x100-meter medley relay swimming with Rebecca Soni, Christine Magnuson, and Dara Torres.

After taking an 18-month break from swimming, Coughlin returned to the pool at the 2010 Conoco Phillips Summer Nationals for swimming. Coughlin qualified for Pan Pacs in the 100-meter backstroke with a time of 1:00.14.

Before racing at the Pan Pacs, Coughlin, along with Amanda Beard, was elected co-captain of Team USA once again. Although she qualified for only one event, Coughlin signed up for the 100 freestyle and 100 backstroke. In the finals of the 100-meter freestyle, Natalie Coughlin won the gold, making a new Pan Pacific record 53.67). In the finals of the 100-meter backstroke, Coughlin finished third (59.70) behind Australia's Emily Seebohm and Japan's Aya Terakawa. Coughlin won two more golds when starting off both the 4x100-meter freestyle relay and the 4x100-meter medley relay.

At the 2012 United States Olympic Trials , the 29-year-old veteran Coughlin found herself in competition with a younger generation of American swimmers. In order to qualify for the U.S team in a given individual event, swimmers are required to finish among the top two. In the finals of the 100-meter backstroke, she finished third behind teenagers Missy Franklin and Rachel Bootsma, and finished seventh in the 100-meter butterfly. Coughlin also competed in the 100-meter freestyle, and finished sixth, qualifying to compete as a member of the U.S. women's team in the preliminaries of the 4x100-meter freestyle relay. While she swam in the qualifying round, she did not swim in the 4x100-meter final, but earned a bronze medal when the U.S. team placed third in the final. It was her twelfth Olympic medal, tying the record previously set by American swimmers Jenny Thompson and Dara Torres for most career Olympic medals won by an American woman athlete.