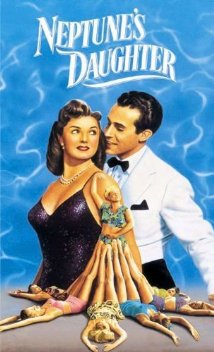 Neptune's Daughter is a swimming movie released in 1914 and, later in 1949, musical romantic comedy film released by Metro-Goldwyn-Mayer starring Esther Williams, Red Skelton, Ricardo Montalbán, Betty Garrett, Keenan Wynn, Xavier Cugat and Mel Blanc. It was directed by Edward Buzzell, and features the Academy Award winning song "Baby, It's Cold Outside" by Frank Loesser. This was the third movie that paired Williams and Ricardo Montalbán together, the other two being Fiesta (1947) and On an Island with You (1948), and the second to co-star Red Skelton (1944's Bathing Beauty). This is one of the first films to display television use.

Neptune's Daughter was the nickname of California swimmer Hazel Cunningham.