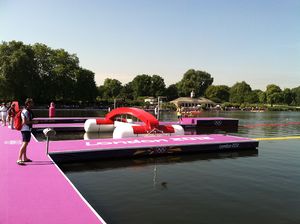 Omega is one of The Swatch Group Ltd's 18 watch brands. The Swatch Group Ltd., which has its headquarters in Biel, Switzerland, is the largest manufacturer and distributor of finished watches in the world. Omega Timing provides time pieces (e.g., watches, clocks and official countdown clocks), timing systems/services, and electronic timing, scoring and scoreboard systems and services to the sporting world.

Omega works regularly with the governing federation of each sport to ensure the equipment used to measure the athletes’ performances are adapted to meet the needs of the competition with the introduction of new and improved timekeeping and data handling technology.