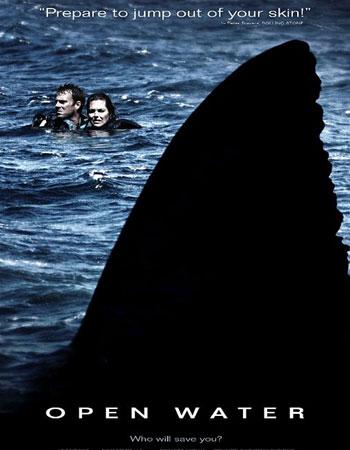 Open Water is a 2003 drama psychological horror film loosely based on the true story of an American couple, Tom and Eileen Lonergan, who in 1998 went out with a scuba diving group, Outer Edge Dive Company, on the Great Barrier Reef, and were accidentally left behind because the dive-boat crew failed to take an accurate headcount.

Daniel Kintner and Susan Watkins are an American couple frustrated that their hard-working lives don't allow them to spend much time together. They decide to head out on a scuba-diving vacation to help improve their relationship. On their second day, they join a group scuba dive. A head count is taken, and the passenger total is recorded as 20. Daniel and Susan decide to separate briefly from the group while underwater. Half an hour later, the group returns to the boat. Going by the tally sheet, the total comes to 20, though in reality, it is 18. Daniel and Susan are still underwater and have not yet realized that the others have returned. The boat leaves the site. Not long after, Daniel and Susan return to the surface and look for it. They believe the group will return to recover them in reasonable time.

Stranded at sea, Daniel and Susan battle bouts of hunger and mental exhaustion, and later realize that they have most likely drifted far from the dive site. They also realize that sharks have been circling them below the surface. Soon, jellyfish appear and sting Daniel and Susan, while sharks come in close. Susan receives a small shark bite on the leg, but doesn't immediately realize it. Daniel goes under and discovers a small fish feeding on the exposed flesh of her bite wound. He does not tell Susan. Later, a shark bites Daniel and the wound begins to bleed profusely. Susan removes her weight belt and uses it to apply pressure to Daniel's wound. He appears to go into shock. The tight-fitting neoprene wetsuits are apparently keeping them from fully realizing they have been sustaining small bites. After night falls, sharks return and attack Daniel during a storm, killing him. The next morning, Daniel and Susan's belongings are finally noticed on the boat by a crew member. He remembers the couple and realizes they must have been left at the dive site. A search for the couple is begun.

Susan realizes Daniel is dead and releases him into the water, where sharks attack him in a feeding frenzy. After putting on her mask, she looks beneath the surface and sees several large sharks now circling her. Susan looks around one last time for any sign of coming rescue. Seeing none, she removes her scuba gear and goes underwater to drown before the sharks can attack. Elsewhere, a fishing crew cut open a newly-caught shark's stomach, finding a diving camera, apparently that of Daniel and Susan. One of the fishermen asks offhandedly to another, "Wonder if it works?"

The filmmakers used living sharks, as opposed to the mechanical ones used in Jaws. The film strives for authentic shark behavior, shunning the stereotypical exaggerated shark behavior typical of many films.