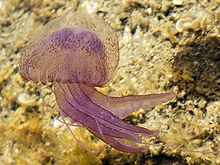 Mauve stinger (or Mauve jellyfish or Pelagia noctiluca) is a jellyfish in the family Pelagiidae. In Latin, Pelagia means "of the sea", nocti stands for night and luca means light thus Pelagia noctiluca can be described as a marine organism with the ability to glow in the dark.

This species of jellyfish is widely distributed in all warm and temperate waters of the world's oceans, including the Mediterranean Sea, Red Sea and Atlantic Ocean. It is also found in the Pacific Ocean, with sightings in warm waters off Hawaii, southern California and Mexico, as well as other Pacific locations. This is typically an offshore species, although sometimes it is washed near the coastlines and may be stranded in great numbers on beaches. The color varies worldwide, and in addition to pink or mauve, it is sometimes shades of golden yellow to tan.

In an unprecedented event on November 21, 2007, an enormous 10-square-mile (26 km2) swarm of billions of these jellyfish wiped out a 100,000-fish salmon farm in Northern Ireland, causing around £1 million in damages.