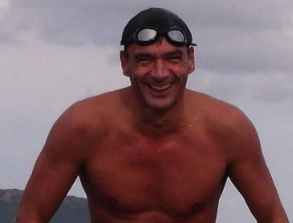 Philippe Fort is a 54-year-old French triathlete, ice swimmer and an aquatic center director from Senlis and Rieux, Picardy. He is a member of Over There! who represents L'Ois'eau libre and who is a member of the Half Century Club.

On 20 January 2019, he became one of the few humans in history to achieve Iron Iceman status by completing both a certified Ice Mile by the International Ice Swimming Association and a full Ironman triathlon in Nice, France.