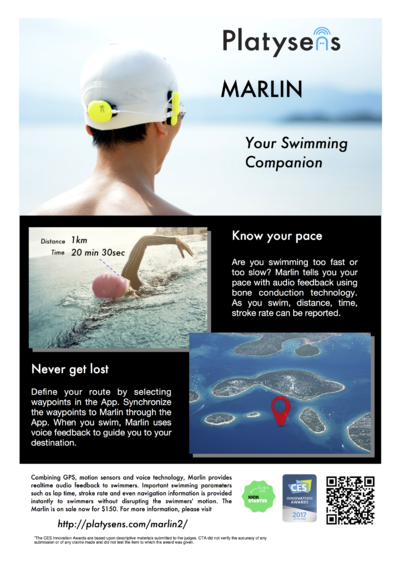 Platysens is a Hong Kong-based company focused on sports sensors and analysis. Founded by sport enthusiasts in 2014, its accurate sports sensors are designed to help athletes and swimmers understand their performance. In 2017, it launched its first product, the Marlin GPS Swim Meter. Its second product is the Seal Swim Analyzer.

To equip athletes with better tools to understand their performance.

Platysens” means Platypus + sense. Platypus is a semi-aquatic egg-laying mammal from Australia. In its bill, there are tiny electroreceptors and mechanoreceptors, which allows it to catch its prey under water, even when the water is murky. Inspired by the platypus, the company aims to use different senses to help athletics monitoring their movements.

The Marlin GPS Swim Meter (or The Marlin) is a GPS Swim Meter that is designed to communicate with pool and open water swimmers. The Marlin combines GPS, motion sensors and voice technology to provide real-time audio feedback to swimmers. Important swimming parameters such as lap time, stroke rate and even navigation information are provided instantly to swimmers without disrupting the swimmer. The bone conduction headset allows for clear and crisp audio feedback underwater.

Seal Swim Analyzer measure swimmer's hand movements as they swim through the water. The patent-pending algorithm calculates the hands’ moving path, as well as force exerted into the water.