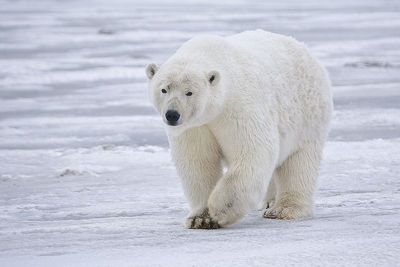 The polar bear (Ursus maritimus) is a bear native largely within the Arctic Circle encompassing the Arctic Ocean, its surrounding seas and surrounding land masses. It is the world's largest land carnivore and also the largest bear, together with the omnivorous Kodiak Bear, which is approximately the same size. An adult male weighs around 350–680 kg (770–1,500 lb), while an adult female is about half that size. Although it is closely related to the brown bear, it has evolved to occupy a narrower ecological niche, with many body characteristics adapted for cold temperatures, for moving across snow, ice, and open water, and for hunting the seals which make up most of its diet. Although most polar bears are born on land, they spend most of their time at sea. Their scientific name means "maritime bear", and derives from this fact. Polar bears can hunt their preferred food of seals from the edge of sea ice, often living off fat reserves when no sea ice is present.

The polar bear is classified as a vulnerable species, with eight of the nineteen polar bear subpopulations in decline. For decades, large scale hunting raised international concern for the future of the species but populations rebounded after controls and quotas began to take effect.[citation needed] For thousands of years, the polar bear has been a key figure in the material, spiritual, and cultural life of Arctic indigenous peoples, and polar bears remain important in their cultures.

Constantine John Phipps was the first to describe the polar bear as a distinct species in 1774. He chose the scientific name Ursus maritimus, the Latin for 'maritime bear', due to the animal's native habitat. The Inuit refer to the animal as Nanook (transliterated as nanuq in the Inupiat language). The Yupik also refer to the bear as nanuuk in Siberian Yupik. The bear is umka in the Chukchi language. In Russian, it is usually called бе́лый медве́дь (bélyj medvédj, the white bear), though an older word still in use is ошку́й (Oshkúj, which comes from the Komi oski, "bear"). In French, the polar bear is referred to as ours blanc ("white bear") or ours polaire ("polar bear"). In the Norwegian-administered Svalbard archipelago, the polar bear is referred to as Isbjørn ("ice bear").

The polar bear is found in the Arctic Circle and adjacent land masses as far south as Newfoundland Island. Due to the absence of human development in its remote habitat, it retains more of its original range than any other extant carnivore. While they are rare north of 88°, there is evidence that they range all the way across the Arctic, and as far south as James Bay in Canada. They can occasionally drift widely with the sea ice, and there have been anecdotal sightings as far south as Berlevåg on the Norwegian mainland and the Kuril Islands in the Sea of Okhotsk. It is difficult to estimate a global population of polar bears as much of the range has been poorly studied; however, biologists use a working estimate of about 20,000–25,000 polar bears worldwide.

The range includes the territory of five nations: Denmark (Greenland), Norway (Svalbard), Russia, the United States (Alaska) and Canada. These five nations are the signatories of the International Agreement on the Conservation of Polar Bears, which mandates cooperation on research and conservations efforts throughout the polar bear's range.

Modern methods of tracking polar bear populations have been implemented only since the mid-1980s, and are expensive to perform consistently over a large area. The most accurate counts require flying a helicopter in the Arctic climate to find polar bears, shooting a tranquilizer dart at the bear to sedate it, and then tagging the bear. In Nunavut, some Inuit have reported increases in bear sightings around human settlements in recent years, leading to a belief that populations are increasing. Scientists have responded by noting that hungry bears may be congregating around human settlements, leading to the illusion that populations are higher than they actually are. The Polar Bear Specialist Group of the IUCN takes the position that "estimates of subpopulation size or sustainable harvest levels should not be made solely on the basis of traditional ecological knowledge without supporting scientific studies."

Of the 19 recognized polar bear subpopulations, eight are declining, three are stable, one is increasing, and seven have insufficient data, as of 2009.

The polar bear is often regarded as a marine mammal because it spends many months of the year at sea. Its preferred habitat is the annual sea ice covering the waters over the continental shelf and the Arctic inter-island archipelagos. These areas, known as the "Arctic ring of life", have high biological productivity in comparison to the deep waters of the high Arctic. The polar bear tends to frequent areas where sea ice meets water, such as polynyas and leads (temporary stretches of open water in Arctic ice), to hunt the seals that make up most of its diet. Polar bears are therefore found primarily along the perimeter of the polar ice pack, rather than in the Polar Basin close to the North Pole where the density of seals is low.

The 42 teeth of a polar bear reflect its highly carnivorous diet. The cheek teeth are smaller and more jagged than in the brown bear, and the canines are larger and sharper.

Polar bears are superbly insulated by up to 10 cm (3.9 in) of blubber, their hide and their fur; they overheat at temperatures above 10 °C (50 °F), and are nearly invisible under infrared photography.[44] Polar bear fur consists of a layer of dense underfur and an outer layer of guard hairs, which appear white to tan but are actually transparent. The guard hair is 5–15 cm (2.0–5.9 in) over most of the body.[45] Polar bears gradually moult from May to August, but, unlike other Arctic mammals, they do not shed their coat for a darker shade to camouflage themselves in the summer conditions. The hollow guard hairs of a polar bear coat were once thought to act as fiber-optic tubes to conduct light to its black skin, where it could be absorbed; however, this theory was disproved by recent studies.

The polar bear has an extremely well developed sense of smell, being able to detect seals nearly 1 mi (1.6 km) away and buried under 3 ft (0.91 m) of snow. Its hearing is about as acute as that of a human, and its vision is also good at long distances.

The polar bear is an excellent swimmer and individuals have been seen in open Arctic waters as far as 200 mi (320 km) from land. With its body fat providing buoyancy, it swims in a dog paddle fashion using its large forepaws for propulsion. Polar bears can swim 6 mph (9.7 km/h). When walking, the polar bear tends to have a lumbering gait and maintains an average speed of around 3.5 mph (5.6 km/h).[51] When sprinting, they can reach up to 25 mph (40 km/h).

The long muzzle and neck of the polar bear help it to search in deep holes for seals, while powerful hindquarters enable it to drag massive prey.

The polar bear is the most carnivorous member of the bear family, and most of its diet consists of ringed and bearded seals. The Arctic is home to millions of seals, which become prey when they surface in holes in the ice in order to breathe, or when they haul out on the ice to rest. Polar bears hunt primarily at the interface between ice, water, and air; they only rarely catch seals on land or in open water.[55]

The polar bear's most common hunting method is called still-hunting: The bear uses its excellent sense of smell to locate a seal breathing hole, and crouches nearby in silence for a seal to appear. When the seal exhales, the bear smells its breath, reaches into the hole with a forepaw, and drags it out onto the ice. The polar bear kills the seal by biting its head to crush its skull. The polar bear also hunts by stalking seals resting on the ice: Upon spotting a seal, it walks to within 100 yd (91 m), and then crouches. If the seal does not notice, the bear creeps to within 30 to 40 feet (9.1 to 12 m) of the seal and then suddenly rushes forth to attack.[53] A third hunting method is to raid the birth lairs that female seals create in the snow.

The polar bear is an enormously powerful predator. It can kill an adult walrus, although this is rarely attempted. A walrus can be more than twice the bear's weight, and has up to three feet long ivory tusks that can be used as formidable weapons. Polar bears also have been seen to prey on beluga whales, by swiping at them at breathing holes. The whales are of similar size to the walrus and nearly as difficult for the bear to subdue. Polar bears very seldom attack full-grown adult whales. Most terrestrial animals in the Arctic can outrun the polar bear on land as polar bears overheat quickly, and most marine animals the bear encounters can outswim it. In some areas, the polar bear's diet is supplemented by walrus calves and by the carcasses of dead adult walruses or whales, whose blubber is readily devoured even when rotten.

Being both curious animals and scavengers, polar bears investigate and consume garbage where they come into contact with humans. Polar bears may attempt to consume almost anything they can find, including hazardous substances such as styrofoam, plastic, car batteries, ethylene glycol, hydraulic fluid, and motor oil.

The polar bear is the apex predator within its range.