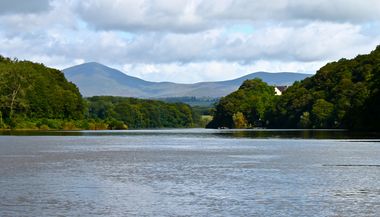 The Kockmealdown Mountains as seen from the River Blackwater near Dromana, Co. Waterford in August 2012. (Photograph: Donal Buckley)

The River Blackwater or Munster Blackwater River (Irish: An Abhainn Mhór or Abha Mhór na Mumhan (Munster dialect), the "Great River") is the third longest river in Ireland. It rises in the Mullaghareirk Mountains on the Cork/Kerry border and flows through the County Cork towns of Mallow and Fermoy as well as the County Waterford towns of Lismore and Cappoquin before emptying into the Celtic Sea at Youghal, Co. Cork. The river is 170 km in length and is suitable for swimming at many locations along its length.

A number of individuals have completed long distance swims on the River Blackwater. These swims include: