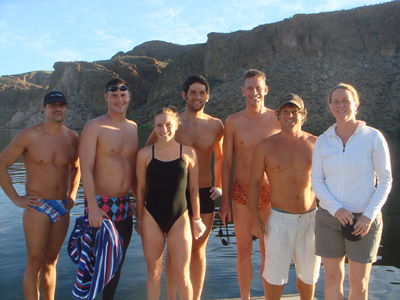 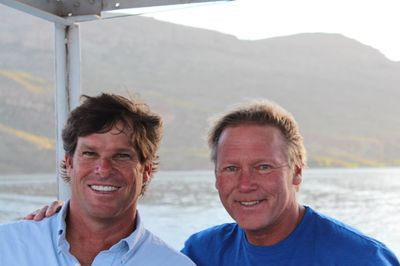 Saguaro Lake is located in Arizona, USA within the Tonto National Forest just 20 minutes from Mesa. Visitors can do boating, fishing, swimming, water skiing and paddleboat touring on the lake.

In Saguaro, the first stage swim is a 9.5-mile (15.2 km) swim at 1529-feet (466m) elevation, which is rimmed with canyon walls. The lake is home to large-mouth bass weighing 12 pounds, small-mouth bass, rainbow trout, walleye, black crappie, tallapia, yellow perch, and carp weighing as much as 30 pounds. It is within the Superstition Wilderness of the Tonto National Forest. It was formed by the Stewart Mountain Dam, a concrete thin arch dam located 41 miles northeast of Phoenix, Arizona. The dam is 1,260 feet (380 m) long, 208 feet (63 m) high, and was built between 1928-30. It was named after a ranch that used to be located nearby known as the Old Stewart Ranch. The swim begins at the east end of Saguaro Lake – the base of Mormon Flat Dam below the Mormon Flat Heliport. The swim ends at the buoy line guarding the Stewart Mountain dam.

Kent Nicholas, a criminal lawyer, staged "a bit of a rogue swim" over four weekends in four lakes as part of his training regimen for the Manhattan Island Marathon Swim, which he completed in June in 8 hours, 8 minutes. He called it the Arizona SCAR Swim Challenge, for Saguaro, Canyon, Apache and Roosevelt lakes. At Lake Roosevelt, the group swam at night with glow sticks around their wrists and ankles "to make it more interesting." Nicholas intends to stage it again next year and make it a recognized event.