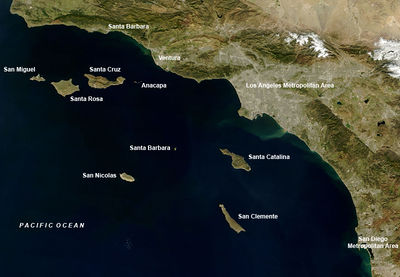 The Santa Barbara Channel Swimming Association (SBCSA) supports and sanctions open water swims to, from, and around seven of the eight Channel Islands.

The following swimmers have successfully crossed from Santa Cruz Island to the California mainland:

Ken 'The Beast' Mignosa's Two-way Santa Cruz Island Crossing was nominated for the 2018 World Open Water Swimming Performance of the Year award: Ken Mignosa, known as The Beast, is one very tough, very hardened channel swimmer. Near two-meter white-capped waves did not stop the 54-year-old during his 17 hour 18 minute Catalina Channel crossing and neither did an unprecedented two-way crossing between Santa Cruz Island and the California mainland with an extra swing around Anacapa Island. His 29 hour 22 minute channel swim was the second longest channel swim off the American West Coast in history and the first two-way Santa Cruz Island swim that painstakingly totalled 65.98 km. For successfully completing the second longest solo marathon swim in California Channel Islands history, for swimming so far with a heartfelt appreciation of his crew and a positive mindset and broad smile, and for quietly compiling an impressive list of channel swims in his 50’s, the Two-way Santa Cruz Island Crossing by Ken Mignosa of the USA is a worthy nominee for the 2018 World Open Water Swimming Performance of the Year.