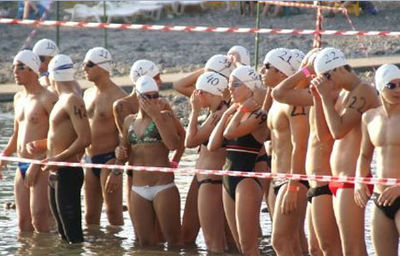 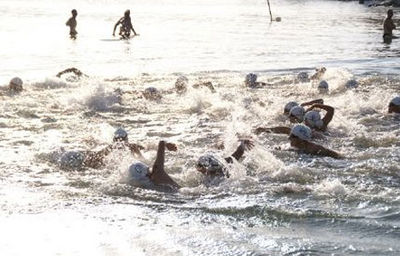 While marathon runs, participatory walks or road-running events are often the largest mass athletic competitions in many countries, Israel stands alone in the world's community. The Speedo Sea of Galilee International Open Water Swim is the largest amateur sports event in Israel and has been held 62 years. Held in the Sea of Galilee (the Kinneret) in northern Israel, the annual event commemorates the Jewish New Year (Rosh Hashanah) and goes from Ein Gev to the finish in Tiberias.

In addition to the amateur heats of 500m and 1.5 km for religious Jewish people and swimming enthusiasts, there are four additional competitive heats. Swimmers in the amateur heats may depart anytime between 7-9 am:

The event is held in cooperation with Global Maccabi, Hapoel, and Guy Beach.

Held on Guy Beach where each participant receives Speedo swimming goggles, a medal and other gifts from the Kinneret Association of Municipalities. Awards and medals are distributed to the competitors. Prize money for the winners of the 10 km Swim.

In a nod to safety for the thousands of athletes who participate in the event, insurance and an ergonometric test are required. Additionally, boats and rafts are stationed every a few hundred meters along the route. If swimmers get tired, they can climb onto the watercraft for a brief rest and continue when they are ready.

Because of the large crowds expected, a special bus service operates between 7-9 am to take swimmers from the check-in area at Zemach Beach to the starting points for the swim events at Maagan and Ha’on.