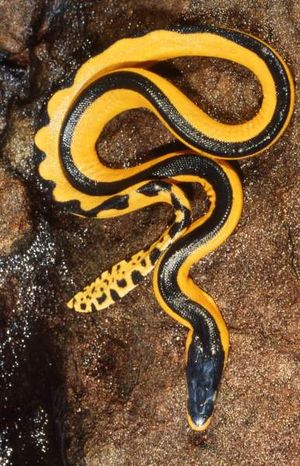 noun - Sea snakes, also known as Hydrophiinae, is a group of venomous elapid snakes that inhabit marine environments for most or all of their lives. Though they evolved from terrestrial ancestors, most are extensively adapted to a fully aquatic life and are unable to move on land, except for the genus Laticauda, which retain ancestral characteristics, allowing limited land movement. They are found in warm coastal waters from the Indian Ocean to the Pacific.

All have paddle-like tails and many have laterally compressed bodies that give them an eel-like appearance. Unlike fish, they do not have gills and must surface regularly to breathe. They are among the most completely aquatic of all air-breathing vertebrates. Among this group are species with some of the most potent venoms of all snakes. Some have gentle dispositions and bite only when provoked, but others are much more aggressive. Currently, 17 genera are described as sea snakes, comprising 62 species.

The majority of adult hydrophiinae species grow to between 120–150 cm (3.9–4.9 ft) in length, with the largest, Hydrophis spiralis, reaching a maximum of 3 m (9.8 ft). Their eyes are relatively small with a round pupil and most have nostrils that are located dorsally.[7] The skulls do not differ significantly from terrestrial elapids, although the dentition is relatively primitive with short fangs and (with the exception of Emydocephalus) as many as 18 smaller teeth behind them on the maxilla.

Most hydrophiinae are completely aquatic and have adapted to their environment in many ways, the most characteristic of which is a paddle-like tail that has increased their swimming ability. To a varying degree, the bodies of many species are laterally compressed, especially in the pelagic species. This has often caused the ventral scales to become reduced in size, even difficult to distinguish from the adjoining scales. Their lack of ventral scales means that they have become virtually helpless on land, but as they live out their entire life cycle at sea, they have no need to leave the water.

The only genus that has retained the enlarged ventral scales is the sea kraits, Laticauda, with only five species. These snakes are considered to be more primitive, as they still spend much of their time on land, where their ventral scales afford them the necessary grip. Laticauda are also the only sea snakes with internasal scales, i.e., their nostrils are not located dorsally.

Since it is easier for a snake's tongue to fulfill its olfactory function under water, its action is short compared to that of terrestrial snake species. Only the forked tips protrude from the mouth through a divided notch in the middle of the rostral scale. The nostrils have valves consisting of a specialized spongy tissue to exclude water, and the windpipe can be drawn up to where the short nasal passage opens into the roof of the mouth. This an important adaptation for an animal that must surface to breathe, but may have its head partially submerged when doing so. The lung has become very large and extends almost the entire length of the body, although it is thought that the rear portion developed to aid buoyancy rather than to exchange gas. It is also possible that the extended lung serves to store air for dives.

Most species of hydrophiinae are able to respire through the top of their skin. This is unusual for reptiles, because their skin is thick and scaly, but experiments with the black-and-yellow sea snake, Pelamis platurus (a pelagic species), have shown that this species can satisfy about 25% of its oxygen requirements in this manner, which allows for prolonged dives.

Like other land animals that have adapted to life in a marine environment, sea snakes ingest considerably more salt than their terrestrial relatives through their diet, and when sea water is inadvertently swallowed. This meant that they had to evolve a more effective means of regulating the salt concentration of their blood. Mammals have the advantage of being able to pass salt in solution, mostly in the urine, but kidney function in birds and reptiles is too weak to remove salt in sufficient amounts. In birds, such as penguins, salt is removed through nasal glands, just as with the marine iguanas of the Galapagos Islands. Sea turtles have lacrimal glands that allow them to produce very salty tears. In sea snakes, the posterior sublingual glands, located under and around the tongue sheath, evolved to allow them to expel salt with their tongue action.

Scalation among sea snakes is highly variable. As opposed to terrestrial snake species that have imbricate scales to protect against abrasion, the scales of most pelagic sea snakes do not overlap. Reef dwelling species, such as Aypisurus, do have imbricate scales to protect against the sharp coral. The scales themselves may be smooth, keeled, spiny or granular, the latter often looking like warts. Pelamis has body scales that are "peg-like", while those on its tail are juxtaposed hexagonal plates.

Aipysurus laevis has been found to have photoreceptors in the skin of its tail, allowing it to detect light and presumably ensuring that it is completely hidden, including its tail, inside coral holes during the day. While other species have not been tested, it is possible that A. laevis is not unique among sea snakes in this respect. Interestingly, dermal light sensitivity is found in all the major animal phyla.

Hydrophiinae is mostly confined to the warm tropical waters of the Indian Ocean and the western Pacific Ocean, with a few species found well out into Oceania. The geographic range of one species, Pelamis platurus, is wider than that of any other reptile species, save for a few species of sea turtles. It extends from the east coast of Africa, from Djibouti in the north to Cape Town in the south, across the Indian Ocean, the Pacific, south as far as the northern coast of New Zealand, all the way to the western coast of the Americas, where it occurs from northern Peru in the south (including the Galápagos Islands) to the Gulf of California in the north. Isolated specimens have been found as far north as San Clemente in the United States.

Sea snakes do not occur in the Atlantic Ocean. It is thought that Pelamis would be found there were it not for the cold currents off Namibia and western South Africa that keep it from crossing into the eastern South Atlantic, or south of 5° latitude along the South American west coast. Sea snakes do not occur in the Red Sea*, believed to be due to its increased salinity, so there is no danger of them crossing through the Suez Canal. Salinity, or rather a lack thereof, is also thought to be the reason why Pelamis has not crossed into the Caribbean via the Panama Canal.

Despite their marine adaptations, most sea snakes prefer shallow waters near land, around islands, and especially waters that are somewhat sheltered, as well as near estuaries. They may swim up rivers and have been reported as far as 160 km (99 mi) from the sea. Others, such as Pelamis platurus, are pelagic and are found in drift lines; slicks of floating debris brought together by surface currents. Some sea snakes inhabit mangrove swamps and similar brackish water habitats and there are two landlocked fresh water forms: Hydrophis semperi occurs in Lake Taal in the Philippines, and Laticauda crockeri in Lake Te Nggano on Rennell Island in the Solomon Islands.

Stidworthy (1974) describes all hydrophiinae species as being reluctant to bite, and Fichter (1982) adds that they are quite docile. Spawls and Branch (1994) also claims they are mainly non-aggressive. The US Navy describes sea snakes as generally mild tempered, although there is variation among species and individuals. Mehrtens (1987) suggests that species such as Pelamis platurus, which feed by simply gulping down their prey, are more likely to bite when provoked because they seem to use their venom more for defence. This is in contrast to others, such as Laticauda, that use their venom for prey immobilization; these snakes are frequently handled with impunity by local fishermen. Species that have been reported as much more aggressive include Aipysurus laevis, Astrotia stokesii, Enhydrina schistosa and Hydrophis ornatus.

Ditmars (1933) mentions that when they are taken out of the water, their movements become very erratic. They crawl awkwardly in these situations and can become quite aggressive, striking wildly at anything that moves. Yet they are frequently caught in nets by fishermen, who unravel and throw them back into the water barehanded, usually suffering no harm. On land, sea snakes are unable to coil and strike like terrestrial snakes.

Observations suggest that sea snakes are active both day and night. In the morning, and sometimes late in the afternoon, they can be seen at the surface basking in the sunlight. When disturbed, they dive below. Sea snakes have been reported swimming at depths of over 90 m (300 ft). They can remain submerged for as long as a few hours, possibly depending on temperature and degree of activity.

Huge aggregations of sea snakes have been reported. For example, in 1932 millions of Astrotia stokesii, a relative of Pelamis, were seen from a steamer in the Strait of Malacca, off the coast of Malaysia, and formed a line of snakes 3 m (9.8 ft) wide and 100 km (62 mi) long. The cause of this phenomenon is unknown, although it likely has to do with reproduction. Ditmars (1933) mentions that, in that same area, sea snakes can sometimes be seen swimming in schools of several dozen, and that after typhoons many dead specimens can be found on the beaches.

Most hydrophiinae prey on fish, especially eels. The latter stiffens and dies within seconds, when bitten. One species prefers molluscs and crustaceans, such as prawns, while a few others feed only on fish eggs, which is unusual for a venomous snake. Some reef dwelling species have small heads and thin necks, making it possible for them to extract small eels from the soft bottom where they hide. Stidworthy (1974) states that they will sometimes take bait from a fishing line.

Like their cousins in the Elapidae family, the majority of hydrophiinae species are highly venomous; however, when bites occur, it is rare for much venom to be injected, so that envenomation symptoms usually seem non-existent or trivial. For example, Pelamis platurus has a venom more potent than any terrestrial snake species in Costa Rica based on LD50, but despite its abundance in the waters off its western coast, few human fatalities have been reported. Nevertheless, all sea snakes should be handled with great caution.

Bites in which envenomation does occur are usually painless and may not even be noticed when contact is made. Teeth may remain in the wound. There is usually little or no swelling, and it is rare for any nearby lymph nodes to be affected. The most important symptoms are rhabdomyolysis (rapid breakdown of skeletal muscle tissue) and paralysis. Early symptoms include headache, a thick-feeling tongue, thirst, sweating, and vomiting. Symptoms that can occur after 30 minutes to several hours post-bite include generalized aching, stiffness, and tenderness of muscles all over the body. Passive stretching of the muscles is also painful, and trismus, which is similar to tetanus, is common. This is followed later on by symptoms typical of other elapid envenomations: a progressive flaccid paralysis, starting with ptosis and paralysis of voluntary muscles. Paralysis of muscles involved in swallowing and respiration can be fatal. After 3–8 hours, myoglobin as a result of muscle breakdown may start to show up in the blood plasma, which can cause the urine to turn a dark reddish, brown, or black color, and eventually lead to acute renal failure. After 6 to 12 hours, severe hyperkalemia, also the result of muscle breakdown, can lead to cardiac arrest.