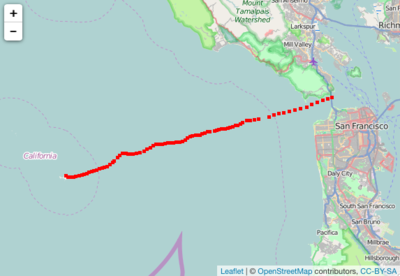 Simon Dominguez is an open water swimmer from Sydney, Australia currently living in Marin County in northern California. He is the president of the South End Rowing Club in San Francisco Bay, California.

He was a member of the unprecedented attempt at a two-way Farallon relay, a 6-person 60-mile (95.6 km) relay from the Golden Gate Bridge to the Farallon Islands in the Pacific Ocean off the coast of San Francisco Bay, on 25 April 2015. They stopped on a one-way crossing at the buoy located at Fisherman's Cove at the South Farallon Island after 29.68 miles in 14 hours 9 minutes in rough seas. The swim was sanctioned by the Farallon Islands Swimming Association. Members included Emily Kreger, Patti Bauernfeind, Simon Dominguez, Kim Chambers, Ashley Horne, Dave Holscher, Kate Webber, Captain Vito Bialla, co-captain Patrick Horn, and David Ogden, M.D.

The members of the Night Train Swimmers completed the first 1-mile circumnavigation swim around Chocolate Chip rock, starting at Devil's Teeth in the Farallon Islands and included Vito Bialla, Dave Holscher, Kim Chambers, Kate Weber, Simon Dominguez, and Ashley Horne on 12 July 2015 amid the presence of Great White Sharks. The Farallon Islands are a group of islands and sea stacks in the Gulf of the Farallones, off the coast of San Francisco, California, United States.