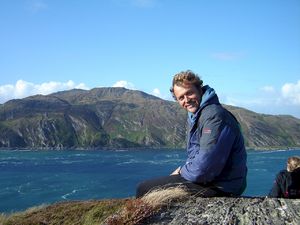 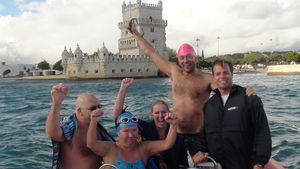 Simon Murie with Dave Sullivan, Margie Sullivan, and Louise Murie after crossing the Tagus River in Portugal in 2012 with pilot Miguel Arrobas

Murie keeps bringing the challenge and allure of the open water swimming world closer to its growing community. With the aim of introducing open water to experienced and inexperienced swimmers in a safe yet challenging environment, he organizes hundreds of weekend and week-long tours and training camps around the world. Thousands of people every year improve themselves as open water swimmers as a result including over 70 swimmers who have graduated from the SwimTrek training camps in Malta with a successful English Channel solo swim to their name.

Murie is a personable aquapreneur who organizes specialist and bespoke charity events like Cancer Research’s The Swim where celebrities and experienced open water swimmers lent their names and reputations to raise significant amounts of money for good causes.

He crossed the Tagus River in October 2012 in 1 hour 21 minutes, together with Louise Murie, Margaret Sullivan and Dave Sullivan and is part of the 2014-2015 World Open Water Swimming Series.

SwimTrek was nominated for the 2012 World Open Water Swimming Offering of the Year award. Its World Open Water Swimming Association nomination reads, SwimTrek is the leader in the lifestyle market of open water swimming vacations. Innovative, global and ever-growing, SwimTrek provides unique package tours that meet the needs of everyone from neophyte triathletes to hard-core English Channel aspirants. Staffed by personable, experienced guides, the SwimTrek tours range from short swims to distance swims everywhere from tropical oceans to temperate lakes. Safe, enjoyable and memorable, SwimTrek continues to refine its tours as the market develops more aquapreneurs offering more options. Its sense of community and its encouragement to those from every walk of life and ability in aqueous venues is what enables it to retain its leadership position. For its plethora of opportunities in wondrous bodies of water, for Simon Murie and his colleagues at SwimTrek who remain courteously hospitable and creative, SwimTrek is a worthy nominee for the 2012 WOWSA Open Water Swimming Offering of the Year.