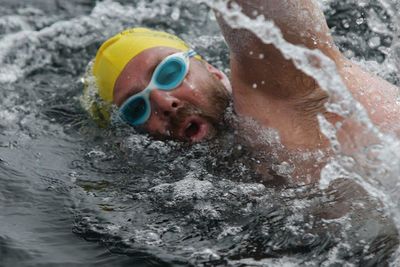 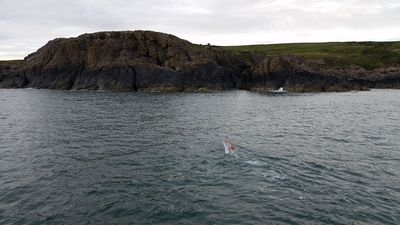 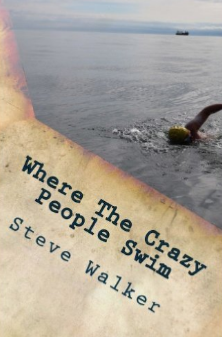 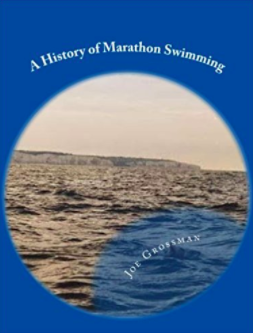 A History of Marathon Swimming, a 536-page book written by Joe Grossman and co-edited by Steve Walker and Dale Petranech

Steve Walker is the 54-year-old owner of Cobaltix and an open water swimmer, observer, coach, and author.

Where The Crazy People Swim[edit]

Walker wrote Where The Crazy People Swim: Outrageous goals, failure, and success, released in October 2016. Cold-water ultra-marathon swimming is about as tough as it gets. When looking at swims, you ask if anyone has done it, if there are jellyfish, and if anyone has died trying it. On most swims, failure is more likely than success. What drives a person to swim long distances in cold water? Why attempt something could kill you? Where the Crazy People Swim lays bare the mind of a swimmer who honestly and candidly describes his fears, his motivations, and his ultimate goal—not only in swimming, but in life. While covered by a veneer of swimming and honesty about failure both in the water and out, this book is about setting outrageous goals and the definition of success.

Walker was the co-editor with Dale Petranech of A History of Marathon Swimming, a 536-page book written by International Marathon Swimming Hall of Fame Honour Administrator Joe Grossman that was published on 19 July 2017 and covers the sport of marathon swimming and its participants including swimmers, coaches, trainers, promoters and pilots, from 1875 to 1974.

In order to preserve the colorful and rich history of marathon swimming, International Swimming Hall of Fame and International Marathon Swimming Hall of Fame dual inductee Dale Petranech kept alive his dream of publishing the personal files of World Professional Marathon Swimming Association administrator Joe Grossman. Despite Grossman's passing in 1974, Petranech faithfully maintained a huge stack of his personally typewritten pages for nearly 5 decades. Steve Walker edited the comprehensively compiled hundreds of pages of notes, observations, recollections and data from solo swims and competitions in numerous bodies of water around the globe. For colorfully recapturing and reformatting the incredibly detailed and long-lost slices of aquatic history over 536 pages, for publishing first-person recollections in A History of Marathon Swimming released 43 years after Grossman's death, and for enabling modern-day swimmers to savor an invaluable treasure that describes the achievements of the swimmers, promoters, coaches and pilots from 1875 to 1974 from the English Channel to the Canadian National Exhibition events, the book A History of Marathon Swimming is a worthy nominee for the 2018 World Open Water Sw