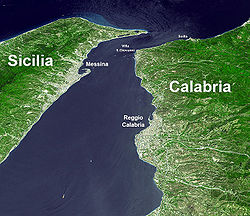 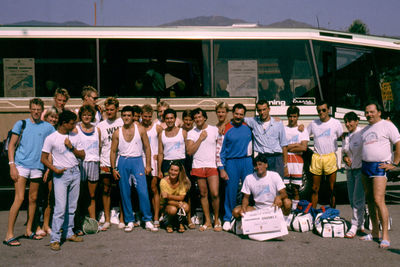 The Strait of Messina (Stretto di Messina in Italian, Strittu di Missina in Sicilian or the Messina Strait) is the narrow waterway between the eastern tip of Sicily and the southern tip of Calabria in southern Italy. It connects the Tyrrhenian Sea with the Ionian Sea within the central Mediterranean Sea. At its narrowest point, it measures 3.1 km (1.9 miles) in width, though near the town of Messina the width is some 5.1 km (3.2 miles) with a maximum depth is 250 meters (830 feet).

The strait is characterized by strong tidal currents, that established a unique marine ecosystem. A natural whirlpool in the Northern portion of the strait has been linked to the Greek legend of Scylla and Charybdis.

For more information on swimming across the Strait of Messina, visit Traversata dello Stretto, the website dedicated to the annual swim race, and Baia di Grotta, the website dedicated to the history of the crossing of the Strait and to the organization of solo and group swims. It is named as one of the World's Top 100 Island Swims by the World Open Water Swimming Association.

The website managed by Nino Fazio keeps record of all the official swims across the Strait from 1930 to the present day at Albo d'Oro. His son Andrea Fazio, at the age of 15, set the current single crossing record of 30 minutes 6 seconds set on 2 September 2015 that was voted as the 2015 World Open Water Swimming Performance of the Year in a global poll conducted by the World Open Water Swimming Association.

Gaia Nadini is shown crossing the Strait of Messina, escorted by Giovanni Arena and Paolo Arena in a masters swimming competition.