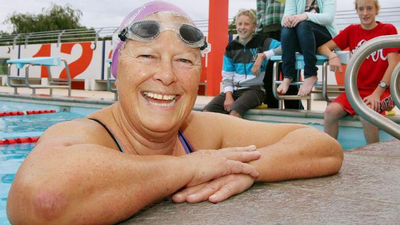 Sue Oldham, member of the Half Century Club and the 11th oldest person in history to successfully cross the English Channel

Sue Oldham of Western Australia is a shining example of how open water swimming just seems to get better with age. While best known for becoming the oldest women to cross the English Channel at the age of 65, the Half Century Club member got a very late start in the sport. Jumping into the ocean in her 40s, Oldham simply gathered steam over the next two decades and has improved from someone who could barely swim 25 meters in a pool to setting the bar for those on the second half of their life.

After completing her 17 hour 11 minute crossing of the English Channel in 2010, Oldham explained, "Every hour of the swim I thought about someone special in my life, and that would motivate me to continue - that's what took me to the end. When you start something you have to finish it, don't you? No point in getting out when it gets a bit tough."

Sue was nominated for the 2010 World Open Water Swimming Woman of the Year for her exploits. Her nomination was as follows:

65-year-old gregarious Sue Oldham entered the Half Century Club as the oldest woman to ever cross the English Channel - for the second time, an unprecedented feat in itself. Sue's time of 17 hours and 11 minutes from England to France was a repeat of her first record-breaking swim in 2006 when she initially joined the exclusive club of solo marathon swimmers over the age of 50 who successfully crossed the English Channel.

From her home base of Australia where she continues to swim the Rottnest Channel year after year, she travels the world to share her passion for the sport with others. As a personable, humble, forthright woman fully enjoying her life and pushing herself to the extremes, Sue Oldham is nominated as the 2010 World Open Water Swimming Woman of the Year.

As opportunities for older women to participate in endurance sports increases, the Half Century Club list will undoubtedly grow to include many more females over the next generation. With Oldham leading the way as she is planning another English Channel swim in 2014 when she is 69 years old, many will similarly find the Fountain of Youth in the open water.

Young At Heart: Sue Oldham is the Oldest Woman to Swim the English Channel