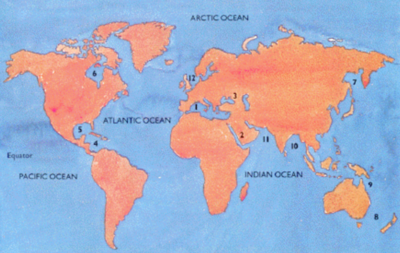 The Tasman Sea is a southwesterly sea of the South Pacific Ocean between Australia and New Zealand, approximately 2,000 kilometers (1,200 miles) across. The sea was named after the Dutch explorer Abel Janszoon Tasman, the first recorded European to encounter New Zealand and Tasmania. The British explorer Captain James Cook later extensively navigated the Tasman Sea in the 1770's as part of his first voyage of exploration.

The Tasman Sea features a number of mid-sea island groups, quite apart from coastal islands located near the Australian and New Zealand mainlands:

Moncrieff and Hood were the first to attempt to a Trans-Tasman crossing by plane in 1928. The first successful flight over the sea was accomplished by Charles Kingsford Smith later that year. The first person to row solo across the sea was Colin Quincey in 1977. The next successful solo crossing was completed by his son, Shaun Quincey in 2010.