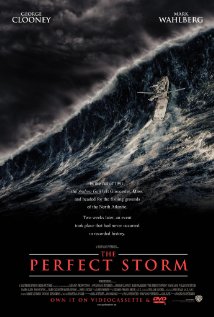 The Perfect Storm is a 2000 biographical disaster drama film directed by Wolfgang Petersen. It is an adaptation of the 1997 non-fiction book of the same title by Sebastian Junger about the crew of the Andrea Gail that got caught in the Perfect Storm of 1991. The film stars George Clooney, Mark Wahlberg, William Fichtner, John C. Reilly, Diane Lane, Karen Allen and Mary Elizabeth Mastrantonio. The film was nominated for two Academy Awards, Best Visual Effects and Best Sound and was a huge box office success. On its opening weekend, the film debuted with $42 million ahead of Sony's The Patriot and eventually brought in over $182.6 million in the United States, and $146.1 million around the world to a total of $328.7 million worldwide.

In October 1991, the swordfishing boat Andrea Gail returns to port in Gloucester, Massachusetts with a poor catch. Desperate for money, Captain Billy Tyne, convinces the Andrea Gail crew to join him for one more late season fishing expedition. The crew heads out past their usual fishing grounds, leaving a developing thunderstorm behind them. Initially unsuccessful, they head to the Flemish Cap, where their luck improves. At the height of their fishing the ice machine breaks; the only way to sell their catch before it spoils is to hurry back to shore. After debating whether to sail through the building storm or to wait it out, the crew decide to risk the storm. However, between the Andrea Gail and Gloucester is a confluence of two powerful weather fronts and a hurricane, which the Andrea Gail crew underestimate.

After repeated warnings from other ships, the Andrea Gail loses her antenna, forcing Captain Linda Greenlaw (Mastrantonio) of sister ship Hannah Boden to call in a Mayday. An Air National Guard rescue helicopter responds, but after failing to perform a midair refuel, the helicopter crew ditch the aircraft before it crashes, and all but one of the crew members are rescued by a Coast Guard vessel, the Tamaroa. The Andrea Gail endures various problems. With 40-foot (12 m) waves crashing onto the deck, a broken stabilizer ramming the side of the ship, and two men thrown overboard, the crew decide to turn around to avoid further damage by the storm. After doing so, the vessel encounters an enormous rogue wave. Billy tells Bobby (Wahlberg) to apply full power to ride over the wave; it seems that they may make it over, but the wave starts to break and the boat capsizes. Billy elects to go down with his ship, the rest of the crew are trapped and only Bobby manages to surface as he watches the boat go under; however, without a life jacket, he has no chance of surviving. He is last seen all alone among the waves. There are no survivors and the film ends with Linda reading the eulogy at the memorial service, followed by Christina and Bobby's mother, Ethel, consoling each other on the dock and Billy's voice soliloquising about what it means to be a swordboat captain.