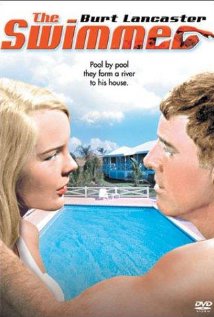 The Swimmer is a title of several different swimming movies.

The Swimmer is a 1968 American film directed by Frank Perry and starring Burt Lancaster, with Janet Landgard and Janice Rule in featured roles. The surreal, allegorical tale is based on the 1964 short story by John Cheever, adapted by Eleanor Perry, the director's wife.

Synopsis of The Swimmer: Neddy Merrill has been away for most of the Summer. He reappears at a friends pool. As they talk, someone notices that there are pools spanning the entire valley. He decided to jog from pool to pool to swim the whole valley. As he stops in each pool his interactions tell his life story.

The Swimmer is a short film edited, written, narrated and scored by Simon Banthorpe in 2012.

The Swimmer is a film by Thomas Beug about Stephen Redmond, an Irish marathon swimmer who tries to make sense of his life one stroke at a time in the isolation of the cold Atlantic Ocean.

The Swimmer is a 2019 film by Blaise Hayward about Walter Strohmeyer, a 90-year-old American open water swimmer from Long Island, New York.