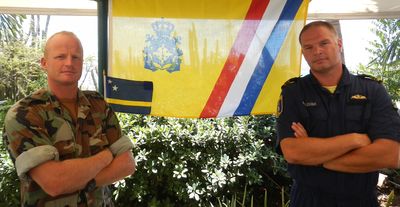 André Nottelman is an open water swimmer, endurance runner, a sergeant in the Netherlands Marine Core, and an instructor at the Dutch Caribbean Coast Guard.

Nottelman ran 76 km Round of Aruba and completed a 26 km crossing with Niko Kluyver from Klein Curaçao to Santa Barbara, Curaçao in the Caribbean Sea. The tandem swim was observed by Gladwin De Lanoi in September 2014.

The Curaçao Channel Crossing is nominated for the 2014 World Open Water Swimming Performance of the Year.

"In a part of the world when open water swimming is common, but channel swimming is not, Niko Kluyver, André Nottelman and Erwin Ruijsink all accomplished the unprecedented. The three men planned a crossing between Curaçao and Klein Curaçao and had to find officials, boatmen and support crew in a country where none existed before. The men researched and recruited, planned and prepared, for the longest and most dangerous swims of their lives. But weather pushed their windows back and a tropical disease halted Ruijsink’s attempt. The trio hung together and kept training and waiting for a break in the weather. For their enthusiasm in pioneering a swim in unchartered territory, for their collective passion that generated local interest in the sport, for their courageous crossing of the Curaçao Channel, the channel swim of Niko Kluyver, André Nottelman and Erwin Ruijsink is a worthy nominee for the 2014 World Open Water Swimming Performance of the Year."