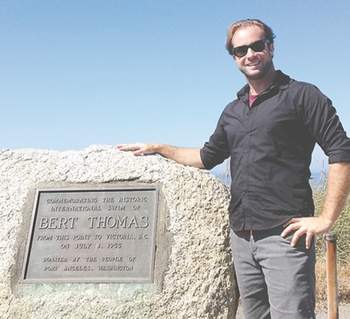 Andrew Malinak is an open water swimmer from New York, United States. He has taken part in a number of open water swimming events on the East Coast of the United States, as well as abroad in Muscat and Dubai. He is president of the Northwest Open Water Swimming Association and a member of the MSF Core Group.

He is a member of the MSF Core Group that oversees standards and policies for Marathon Swimmers Federation projects. He is joined by David Barra, Caroline Block PhD, Elaine Kornbau Howley, Anthony McCarley, Evan Morrison, Emma Radford, and Sarah Thomas.

Malinak was one of the architects of the MSF Rules of Marathon Swimming.

Malinak's photography was featured in the 2016 MSF Calendar:

In July of 2014, Andrew (now a resident of Seattle) attempted to become the 8th person to cross the Strait of Juan de Fuca between Vancouver Island and the Olympic Peninsula of Washington. After 6 hours 10 minutes, the swim was ultimately called short due to adverse currents and water temperatures between 46 and 50 degrees F, but the planning process that went into it and media attention the event gathered was no small feat in its own. The swim was written up by Andrew along the way covering the challenges of planning a complex marathon swim from scratch. The write-up, along with other entertaining material, can be seen at Please tap on the glass.

Malinak was named as one of the World's 50 Most Adventurous Open Water Men in 2016 by the World Open Water Swimming Association: