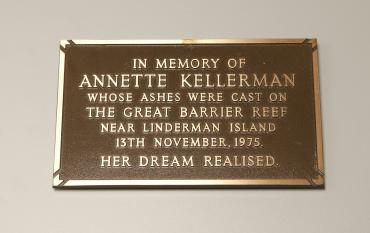 The plaque is dated 13 November 1975 and was donated to the Sydney Opera House to augment the Kellerman collection.

Annette Kellerman kept a large collection of theatrical and aquatic memorabilia from her long career. In 1975, while living in retirement on the Gold Coast, she saw a segment on ABC-TV's 'This Day Tonight' about the recently created performing arts archive at the Sydney Opera House. Having learnt to swim at Cavill's Baths in Farm Cove, near where the Opera House now stands, she decided this was the appropriate repository for her collection. She asked her sister Marcelle to ring the Opera House to make an offer of donation. Marcelle spoke to Barbara Firth, a member of the Ladies Committee of the Sydney Opera House Appeal Fund and an honorary coordinator of the performing arts archive. Frank Barnes, the Opera House's general manager, agreed that the opportunity to acquire the collection should not be missed. In September 1975 Barbara Firth spent five days on the Gold Coast with Annette Kellerman and took possession of the entire collection on behalf of the Opera House. A furniture van was needed to transport the seven large cabin trunks that held the large collection. Within weeks Kellerman had passed away, on 6 November 1975.

In the late 1990s the objects in the Annette Kellerman collection were transferred from the Dennis Wolanski Library and Archive of Performing Arts at the Sydney Opera House, to the Powerhouse Museum. The collection's paper material, including photographs, was transferred to the State Library of New South Wales. Barbara Firth's biography of Kellerman, written with Emily Gibson and titled 'The Original Million Dollar Mermaid' was published by Allen & Unwin in 2005.