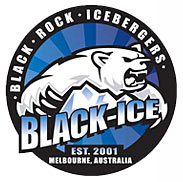 The Black Rock Icebergers train every Saturday morning throughout the year at the Brighton Sea Baths, including winter when the air temperature ranges from 6°C to 15°C (42°F to 59°F).

To become an official member of the Black Rock Icebergers, a swimmers is required to complete a 3 km circuit of the long course at Brighton Baths during winter when the water temperature must be at or below 10°C (50°F) under the following rules: 1. No wetsuits and, 2. No neoprene swim caps.