Blueprint: Build a Bulletproof Body for Extreme Adventure in 365 Days 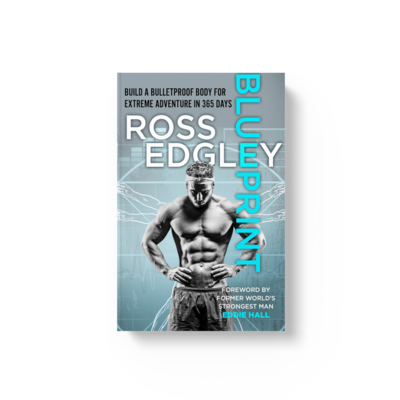 Blueprint: Build a Bulletproof Body for Extreme Adventure in 365 Days is a how-to book written by Ross Edgley who has spent decades perfecting the principles and practice of extreme fitness to achieve the impossible.

Following a career-threatening injury in 2018, Edgley was forced to reassess his training and take the next steps in a lifelong journey of redefining what the human body is capable of. In Blueprint, he shares the cutting-edge training program that empowered him to rebuild his body from surgery and a doctor’s gloomy prognosis in just 365 days to complete a world record swim.

Whether it’s climbing a mountain, swimming the English Channel or a gruelling triathlon, Blueprint will teach you the tried and tested principles of sports science that have been used for decades by Olympians, explorers and adventurers at the limits of peak physical endurance.

The book features almost 30 tailored workouts for different phases of training, packed with digestible sports science to help you optimise your workouts, and interspersed with Edgley's own daring adventures across the world, Blueprint is the ultimate guide to optimizing your time and training to make the impossible possible.

Ross Edgley (born 1985) is a celebrated strongman and open water swimmer, former water polo player, decorated expert in the fitness industry, and a graduate of Loughborough University School of Sport and Exercise Science. Edgley is co-founder of The Protein Works and has amassed a social media following of well over a half a million people.