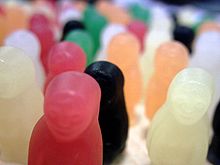 noun - Bumper is a type of orange-colored, orange-flavored Jelly Babies, a type of soft candy that are shaped as babies in a variety of colours. Jelly babies are favored by many channel swimmers.