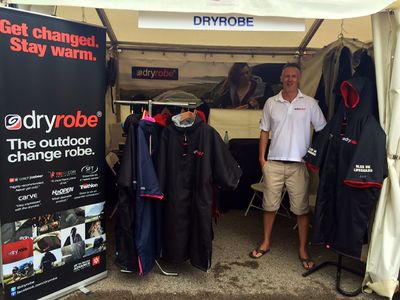 Gideon Bright, designer of the Dryrobe®

noun - The Dryrobe® The Outdoor change robe™ is a garment that allows individuals to change in and out of their swimwear along a shoreline, in a parking lot, or in other public locations.

Gideon Bright is a North Devon, United Kingdom-based surfer with over 30 years experience in the water. Growing up in Cornwall and working in graphic design, until a bit part in a movie called 'Blue Juice' led to London, where he worked in the film industry for 15 years before relocating back to North Devon and designing Dryrobe® The Outdoor change robe™.

Cliff diving in in the UK at Adrenalin Quarry near Liskeard in Cornwall, England with dryrobe ambassador and Red Bull Cliff Diver Blake Aldridge