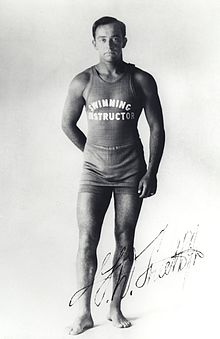 Waterman George Freeth, The Man Who Can Walk On Water

George Freeth (born on Oahu on 8 November 1993, died on 7 April 1919 due to a global flu pandemic), known as the The Man Who Can Walk On Water, was a surfer from Hawaii who introduced surfing to the United States. He also organized the first lifesaving corps in California on its beaches. He was an avid promoter of swimming during the first and second decades of the 20th century. He was nominated as a Pioneer for induction in the International Swimming Hall of Fame and is often credited as being the "Father of Modern Surfing".

Freeth is credited by some with developing the rescue paddle board. Freeth has been reported to make a heroic rescue of Japanese fishermen in storm conditions.

His life and contribution to surfing and lifeguarding is a significant part of the documentary film Waveriders. His bust is located in Redondo Beach, California.