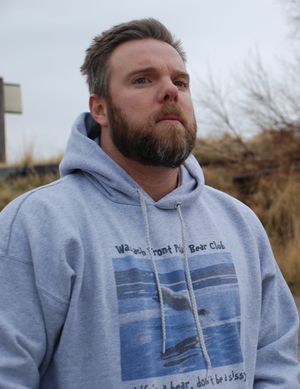 Goody Tyler IV is a marathon swimmer and extreme swimmer from Utah, USA. Goody regularly swims in the open water of the Great Salt Lake and Jordanelle Reservoir. Goody loves swimming in the open water all year round. He completed an ice swim under the auspices of the International Ice Swimming Association in December 2012.

He is a passionate extreme swimmer and one of the founders of the Wasatch Front Polar Bear Club.

Goody grew up in the military and always had a love of swimming despite his location. When he was 15, he started doing triathlons with his father. Later he trained and completed a full ironman in 1998 in Canada. A few years later he had a near fatal incident during a half ironman in N.C. He decided to take a break from triathlons which turned into a permanent break. After moving to Utah, he rediscovered his love for the open water. He met local swimmers Josh Green and Gordon Gridley. Shortly thereafter, the Wasatch Front Polar Bear Club was formed and several Utah swimmers gathered every week throughout the winter months, to swim in the Great Salt Lake where water temperatures dropped down into the low 30s°F (1-2°C). In 2012, Goody became the 8th American to complete an "Ice Mile". 4 days after completion of this, he started treatment for testicular cancer. 6 months of treatment and surgery kept him sidelined from his favorite activity during the winter of 2012 through Spring of 2013. He beat cancer and eagerly went back to training for the 2013 season. Goody continues to be a key player in the Utah Open Water scene.

In this promotional video Goody shares his experience of swimming in the super saline water.