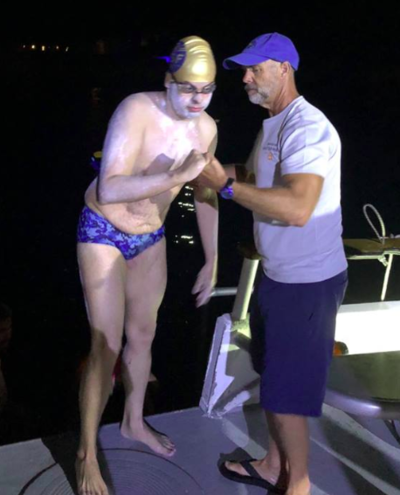 John Batchelder with Dan Simonelli after butterflying for 17 hours 14 minutes across the Catalina Channel from the California mainland to Santa Catalina Island, an unprecedented direction for a butterfly crossing on 17 July 2018 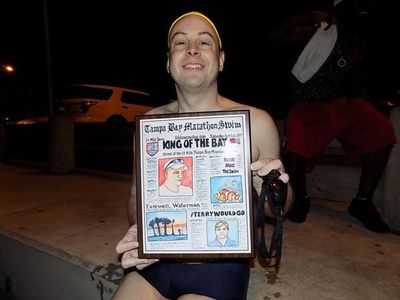 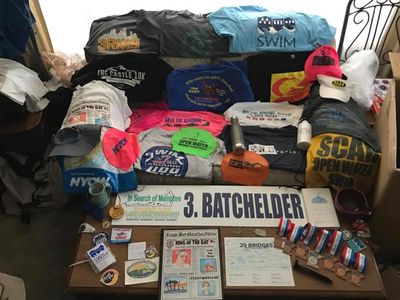 John Batchelder, nicknamed Batches and SuperFly, is a 41-year-old American open water swimmer and mathematician from Littleton, Colorado who specializes in all butterfly marathon swims. He is a member of Colorado Masters Swimming. He has a blog of his swim experiences, many of which are listed on the list of comparative speed for Open Water Butterfly Swims and his overall marathon swim stats are tracked by the Marathon Swimmer's Federation.

He was nominated for the 2021 World Open Water Swimming Performance of the Year Award. The winners and nominees included:

He was nominated for the 2018 World Open Water Swimming Man of the Year by the World Open Water Swimming Association:
John Batchelder is marathon swimming butterflyer extraordinaire. Every year, he continues to push himself beyond the reasonable. This year, he set off across the English Channel, swimming only butterfly. He swam non-stop fly for 14 hours 46 minutes before an upset stomach in the Channel got the better of him. Within weeks, he set off to attempt an unprecedented 64.6 km two-way crossing of the Catalina Channel butterfly the next month. A record swim was not realized, but the 46-year-old did complete a successful one-way Catalina Channel crossing in California in 16 hours 14 minutes. He had little time for recovery before finishing the 25 km Border Buster in Vermont's Lake Memphremagog in 10 hours 22 minutes. His goal to match Vicki Keith's legendary 50-mile butterfly swim was then set for Lake Powell in Utah. That valiant butterfly swim ended after 54.9 km and about 28 hours during his second night when hallucinations got the better of him. For swimming for all the right reasons - keep in shape, to push himself, for fun and friendships, for becoming the world's most prolific marathon swimming butterflyer, and for continuing to strive for success even with DNF's along the way in swims that very few would attempt, John Batchelder of the USA is a worthy nominee for the 2018 World Open Water Swimming Man of the Year.

John Batchelder set the bar so high, it is almost inconceivable that any man will have the patience, passion and planning to replicate the totality of his butterfly open water achievements within one calendar year. The 46-year-old took on 19 open water races and channel swims - all butterfly - in addition to doing 4 marathon swims freestyle this year. His butterfly swims include a 48.6 km swim in Tampa, a 45.8 km swim in New York, a 40 km swim in Pittsburgh, a 19.4 km swim in Charleston, a 56.9 km swim in North Dakota, a 15.2 km swim in Arizona, a 16.6 km swim in Portland, and a Catalina Channel attempt. He knocks off these brutally tough all-butterfly swims with a calm demeanor and steely determination. He does all this swimming while balancing a busy corporate life and constant travel from coast to coast in the United States. For his indomitable spirit in the face of rough conditions, for his personal ambition to redefine toughness, for his understated joy while tackling channels, seas, rivers and lakes over 446 km in distance, John Batchelder is a worthy nominee for the 2015 World Open Water Swimming Man of the Year.

You asked me about my distance butterfly open water swims and training. Honestly, I do not, and never had, trained specifically for long distance butterfly. Butterfly just comes naturally to me; it’s been that way ever since I first learned it when I was around 6. I swam a 500 yd fly once in high school practice, but that was as far as I went. I stopped swimming at age 16 to focus on academics.

Fast forward to recent years. I got back into swimming about three and a half years ago. I joined a masters swim team that has practices every day of the week, and I started swimming on average 5-6 times per week. It took me a little while to get my feel for the water back again, but a year later I found I was faster than I had ever been, and the butterfly just felt as natural as I remembered from my younger days. My main focus of my training ever since has been distance events, focusing on the “brute squad” events - 200 fly, 400 IM, and 1650 free.

Our masters teams occasionally puts together unofficial dual meets with another club, and I would swim fly mainly to show off, but also to kind of level the playing field with the other swimmers on the teams, and even then I was still faster than most of my workout buddies. Then the swim-fly-fast postal came along (www.swimflyfast.com), and I started periodically swimming the various butterfly distances to register my times for each of the distances, and this was the first time I swam more than 500 yes fly, doing the 1650 SCY and 1500 LCM.

In 2015 I decided to do all the US masters nationals competitions, including all the open water. This took me to the Del Valle Open Water Festival. I signed up for the 10K on the Saturday and 1 mile on the Sunday as they were national championship races, and while I was there I signed up for the 2.5K just for fun, also on Sunday (I think I mistakenly told you 5K before). When the 2.5K came around, I was worn out from the previous races, so just on a whim I decided to pull back and swim butterfly. I completed the 2.5K in 44:51, not really putting much effort into it. Here I realized I could indeed go so much further without really getting tired. A few months later, I decided to push my fly a little further, doing a 10K open water swim in 4:14:10 (at altitude, no less), and still I found I wasn’t really pushing myself and could go further.

Then one of my club swimming buddies, Cliff Crozier, informed me about Dan Projansky, so that’s what got me to sign up for END-WET. I didn’t actually decide for sure if I would do butterfly or not until race day, as I knew the water conditions weren’t favorable. As with all my distance butterfly swims, I didn’t particularly train for the race. It always has been a spur of the moment type thing with me.

So, you asked me how I train for distance butterfly, but my answer is I do not specifically train for it. My training has always been for distance pool events, primarily the 1650 free. Distance fly has always been just a diversion for me, never a focus. Over the years I’ve come to accept that I cannot explain why I can swim butterfly for long distances (and without any real training for it) - I just can.

Other long distance fly swims not mentioned above:

So what’s next for distance fly: well, now that I had one failed attempt at it (and mind you, the failure was because of darkness, not because I ran out of steam), I’ll have to come back to END-WET to complete it butterfly. I’m also thinking of doing the Arizona SCAR open water swims. For this year, I’ve got two 10Ks coming up in Colorado, but I’ll probably swim them freestyle. I am doing the swim from Alcatraz challenge this year in August, and I do plan to do it butterfly, but that’s a short swim in comparison with what else I’ve done (~1.5 miles).

Batchelder was named to the World's 50 Most Adventurous Open Water Men in 2016 (alphabetized by last name) by the World Open Water Swimming Association: